Company Overview
11 Plc started the distribution of Sunflower kerosene in Nigeria in 1907 as Socony  Vacuum Oil Company. It became Mobil Oil Nigeria Limited in 1951. The company went public in 1978 and was renamed Mobil Oil Nigeria Plc. Currently, the shares of 11PLC are traded on the NASD OTC Securities Exchange following the voluntary delisting of its shares from the Nigerian Stock Exchange in 2021.

The sale of ExxonMobil’s 60% equity stake in the company to NIPCO Investment Limited culminated in the change of name to 11PLC   in April 2017. NIPCO Group owns an 84% stake in 11PLC.  The company resolved to diversify its sources of earnings by venturing into real estate and hospitality. Consequently, it acquired Lagos Continental Hotel in the year 2020.

Ramesh Kansagra is the chairman of the board of directors; Adetunji Oyebanji has been occupying the position of managing director since 2008.

Investment Thesis
11PLC, one of the major distributors of petroleum products in Nigeria, boasts of over 200 fuel stations across the country. Its business is divided into two, namely petroleum products marketing and property business. The property business is made up of rental investment properties and hospitality. The hospitality business of the company is carried out by Lagos Continental Hotel (LCH). Though it was bought during the year 2020, LCH more than doubled its revenue in the year under consideration. LCH made revenue of NGN4.1 billion in 2021 compared to NGN1.6 billion announced at the end of the preceding year. However, the hospitality business has yet to produce any profit owing to the lack of enough revenue to cover its operating expenses; a Loss Before Tax (LBT) of NGN1.2 billion was declared at the end of the 2021 fiscal year compared to a LBT of NGN3.3 billion made a year earlier. We expect improvement going forward.

The petroleum marketing business requires a lot of finance and is typically a low-margin business. A high inventory turnover could benefit investors. It is commendable that the management of 11PLC is exploring other avenues for boosting its earnings. The huge outlay required for the procurement of petroleum products has increased the company’s indebtedness. The finance cost associated with petroleum marketing was NGN611.7 billion in 2021 compared with NGN475.9 million in the prior year. Petroleum products sales revenue has increased by 13.3% over the past three years. The high cost of sales resulted in gross profit margin of 6.8% in 2021 (2020:7%);  PBT margin stood at 2.3% (2020: 2.4%)  while profit After Tax (PAT) margin was  1.6% (2020:1.1%).

The sales revenue of 11PLC is high even though the profit margins are low. Sales Per Share of NGN675.15 in 2021 exceeded its 11-year average by 53.1% or NGN234.25.The company’s profit margins should improve as its pays off even though they are below their historical averages presently. The company makes profits and pays dividends on a regular basis. Return on Equity and Return on Assets averaged out to 18.3% and 7.8% respectively over the past three years. Investors should not buy the shares of 11PLC above their estimated fair value.

Financial Overview
The total revenue of 11PLC was NGN243.5 billion at the end of the 2021 fiscal year. Fuel sales accounted for the bulk of revenue increment in the year under consideration. Fuel sales jumped 30% to NGN162.1 billion in 2021 from NGN124.7 billion in the previous year. Lubricants produced revenue of NGN57.5 billion, up from NGN37.4 billion in the prior year.  Liquefied Petroleum Gas contributed NGN19.8 billion or 8.1% of total revenue (2020: NGN1.9 billion or 1.1% of total revenue). Altogether, fuels and lubricants produced 90.2% of the company’s total revenue compared to 97.9% in the earlier year.

Gross profit reached a 10-year peak in the 2021 fiscal year in spite of a  year-over-year cost of sales increase of 46.4%. Operating profit was NGN9.9 billion in 2021, up from NGN5.9 billion declared a year before. PBT jumped 68.1% to NGN9.6 billion while PAT more than doubled to close at NGN6.1 billion owing to a fall in the tax rate.

Operating expenses averaged out to 7.2% of turnover over the past ten years while the cost of sales has hovered around 88.3%. Though they remain low, profit margins have improved slightly over the prior year.  Operating profit, PBT and PAT margins were 4.1%, 3.9% and 2.5% respectively; they all gained less than 1 percentage point year-over-year.

11PLC’s debt is mounting; total debt was NGN14 billion as at 31st December 2021 compared to NGN5.3 billion recorded at the end of 2020. 11PLC can honour its debt obligations as it produces enough operating profit and operating cash to offset them. Operating profit could pay its interest 16.2 times (2020:12.5 times) while operating cash flow covered it 15.7 times (2020:39 times). Besides, total debt formed only 11.4% of total assets and 32.8% of shareholders’ fund in the year under consideration. We do not have any reason to believe that the company is going to become insolvent in the medium- or long term.

Business Risk
The high cost of sales is the bane of the business. Besides, rising debt could thin out profit margins. 11PLC is trying to spread its risk by diversifying its operations. We expect the property business to strengthen the company’s profit margins as sales volume increases. 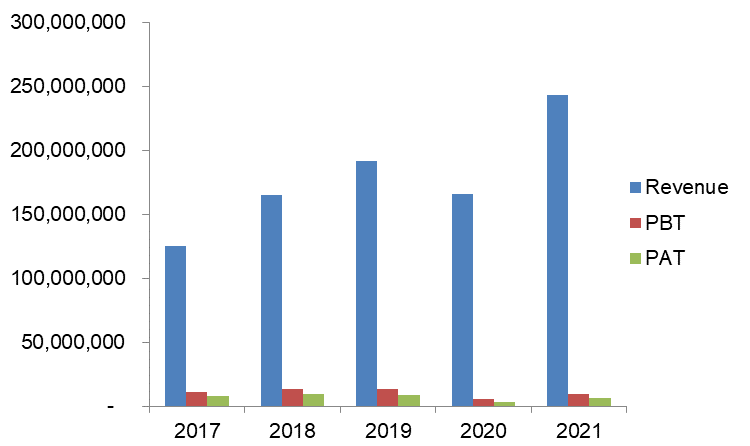 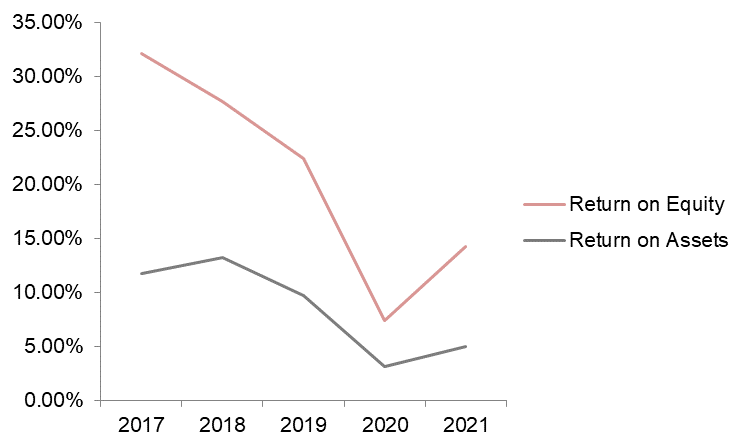