Olumide Obayomi is the board chairman of ABCTRANS. Francis Nneji, the founder, is the managing director of the company.

Cargo services and truck/spare parts sales have been increasing in prominence. Together they produced over 60% of revenue in the last two financial years. Hospitality service brings in about 3% of revenue while the haulage services segment which provides long-distance haulage services to manufacturers has been in decline. Earnings from sprinter passenger operations are on the rise, but coach passenger transport is losing momentum. The performance of its operations in Ghana has been worsening.

ABCTRANS struggles to make a profit and shareholders have not been adequately compensated for their investment in the company. Both return on equity and return on assets have not been encouraging. However, the management has not stopped investing in the business, especially the business segments that have been showing signs of improvement. We expect the efforts of the management to turn around the company to pay off if it does not relent. We recommend a hold on the company’s shares in the light of its dwindling performance over the years.

Valuation
A share of ABCTRANS is valued between NGN1.10 and NGN2.79. A return of 128.1% is expected on the shares of the company.

Financial Overview
ABCTRANS declared revenue of NGN6.6 billion for the year ended 31st December 2021; this was a 15.2% drop when compared with the prior fiscal year in which revenue grew by 16% to NGN7.8 billion. Cargo services produced 32.8% of total revenue; truck/ spare parts sales accounted for 31.9% of revenue while passenger transport contributed 25.2% of total revenue. Though it lost 48.8% year-over-year to close at NGN2.1 billion in 2021, revenue from truck/spare parts sales expanded by 15.8% over the past three years. Cargo services gained revenue of 12.3% on a 3-Year CAGR basis while passenger transport sales have lost 12.3% over the past three years.

Despite an 11.6% fall in the gross profit, the gross profit margin gained 67 basis points to 16.5%. High direct costs resulted in a gross loss in coach passenger operations for three straight years and haulage services for two consecutive years. ABCTRANS’s operating loss was NGN90 million in 2021 compared to an operating loss of NGN361.4 billion in the preceding fiscal year. However, it made a PBT of NGN140.7 million as against a Loss Before Tax of NGN323.5 million in the prior year. The positive PBT in 2021 was due to a NGN384.2 million profit realised from the sale of property, plant and equipment. The only business segments that made positive contributions to PBT in the year under consideration were cargo services, hospitality and truck/spare parts sales. Passenger transport and haulage services made a total negative PBT of NGN656.6 million in 2021. ABCTRANS has not made any positive PBT from passenger transport for eight consecutive years. ABCTRANS announced a Loss After Tax (LAT) of NGN88.6 million in 2021 as against a LAT of NGN478.9 million in the earlier year.

Total assets grew by 3.5% to NGN6.1 billion while total equity decreased by 8.9% to NGN1.1 billion. Return on assets and return on equity stood at -1.5% and -13.7% respectively. Total debt has risen at a compound rate of 36.9% over the past three years. The company finds it difficult to generate adequate operating profit to pay off its interests in a regular manner. The operating losses declared in the past two years meant that the company could not cover its debt obligations. In addition, the increase in its short-term debt has exerted liquidity pressure on ABCTRANS. Though total debt exceeded shareholders’ fund by 22.8 percent in 2021, we do not believe that the company’s long-term solvency is impaired. 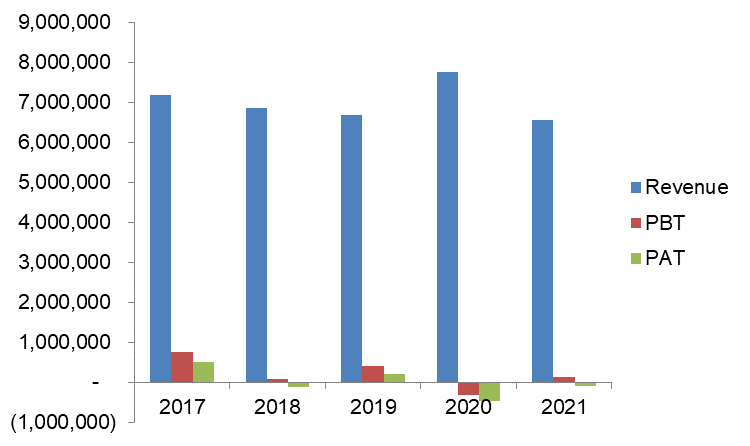 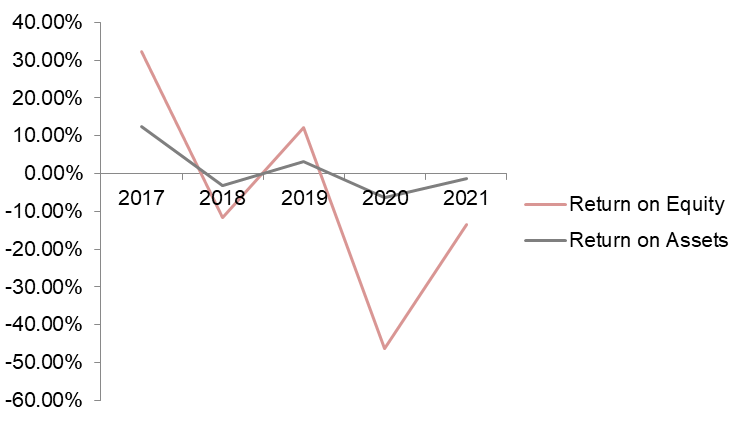