The company has manufacturing facilities in South Africa and India. It distributes its products to countries such as Zambia, Mauritius, Malawi, Ethiopia and Nigeria. It has presence abroad through Adcock Ingram Limited (India), Adcock Ingram East Africa Limited (Kenya) and Ayrton Drug Manufacturing Limited (Ghana). Datlabs (Private) Limited (Zimbabwe) was disposed of in January,2019.

Its partnership with renowned companies such as Takeda, Novartis and Abbott Laboratories has afforded the company the opportunity to increase its offerings to customers in South Africa and beyond.

Investment Thesis
The reorganisation of the business which began in 2014 has paved way for brand resurgence and improved performance. Top and bottom lines have improved. Turnover jumped to R6.5 billion from R5.2 billion recorded in 2014. Profit Before Tax (PBT) has been growing in the past three years. Profit After Tax (PAT) rose to R644.1 million from  R520 million of the prior year.

The acquisition of Virtual Logistics Proprietary Limited (Virtual) in April 2017 has strengthened its distribution network and enhanced its presence and reach in South Africa where it derives over 90% of its earnings. It acquired  Genop Holdings Proprietary Limited in January, 2018.  Genop Holdings Pty Limited distributes   instruments used in ophthalmic and plastic surgeries, eyecare and skincare products. This acquisition has broadened the product portfolio of the company.

There has been improvement in the past four years judging by the key performance parameters. The company has paid down its total debts to R251.3 million in 2018 from R1.3 billion in 2014. Shareholders' fund which has been on the rise reached R3.9 billion while total assets closed at R6.3 billion. 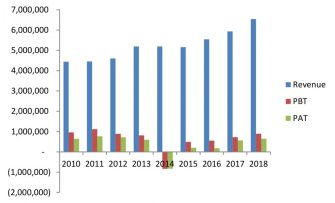 We are of the opinion that cost containment would improve profit margins going forward.

OTC has leading brands like Panado and Compral and revenue from Over the counter(OTC) self medication and wellness market increased to R2 billion in 2018  from R1.8 billion of the previous year amounting to 7.6%  gain.

Over the past three years consumer and OTC segments have produced, on the average, operating profit margin of 14.6% and 18.8% respectively.

Revenue from South Africa increased by 10.2% compared to 6.8% of 2017. The rest of Africa had a revenue boost of 7.5% compared to 15.9% of a year ago. We are of the opinion that other African markets would help boost and diversify the earnings of AIP. Moreover, the rest of Africa has started contributing positively to operating profit.

We are of the opinion that the management's effort to put AIP on a pedestal is commendable.

Valuation
AIP trades at 2.7 times book value. Adjusted Earnings Power Value is put at R21.4 while average Book Value Per Share stood at R16.1. Both trailing and forward P/E are estimated at 16.4 and 14.8 times respectively. Our Two-Stage Dividend Discount Model produces a value ranging from R30.7 to R41.5 for a share of the company. A fair value estimate between R35.4 and R41.7 was arrived at using Discounted Cash Flow Model. Therefore, AIP seems overpriced at the current market price of R60.55.

Financial Overview
Turnover has been growing at a compound rate of 8.2% in the past three years. OTC and prescription drugs jointly accounts for about 60% of turnover. South Africa accounts for over 90% of earnings. The rest of Africa is responsible for about 3.4% and 2.1% of revenue and operating profit respectively. 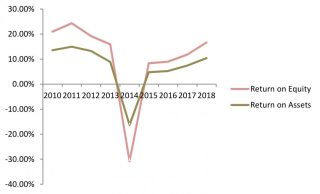 Operating profit margin gained 1.1% year-on-year to end the year at 13.3%.  PAT margin of 9.9% represents an improvement of 1.1 percentage points on the previous year. Cost of sales amounts to 60.8% of turnover compared to 62.2% of the previous period.

Adcock Ingram is a low-geared company and as such is not overburdened by debt obligations.  In addition, it is neither illiquid nor insolvent. Operating profit can pay interest obligations 33.1 times (2017:18.9 times) while operational cash flow can settle it 14.6 times (2017: 11.9 times). The company generates free cash flow. Current and acid test ratios stood at 1.6 and 0.9 times respectively. Though capital spending is on the rise, the company still generates positive free cash flow for the shareholders.

Its quarter 2 results to December 2018 showed that turnover gained 15.3% owing largely to price increase. Turnover from outside South Africa decreased by R2.2 million from R43.1 million of the corresponding period of the previous year.  Operating profit was R457 million up from R391.7 million. Both PBT and PAT increased by 14%. Gross profit margin added 0.8% to reach 38.6% at the end of December 2018. PBT margin was 13.8% compared to 14% of the corresponding period. PAT margin closed at 9.9% losing 10 basis points. Shareholders' equity increased to R4.1 billion from R3.7 billion.

Business Risk
AIP faces regulatory risk as it operates in a highly regulated industry with the attendant costs. We are of the opinion that the company can ward off new entrants due to high capital requirement of the business.