Company Overview
AFRILAND is a property management, investment and development company domiciled in Nigeria. The company, formerly known as UBA Properties, was incorporated in 2007 but commenced operations in February 2011. AFRILAND trades on NASD OTC Exchange.

AFRILANDꞌs products which cut across the real estate value chain include facilities management, agency services, project design, project directorate, project development, project management and sale of properties. This variety of the company’s products is a plus for the management because it helps broaden its offerings and revenue sources.

Emmanuel Nnorom replaced Erelu Angela Adebayo who retired as chairman on October 23, 2018. Mr. Emmanuel joined the board of AFRILAND in 2014 and is the Chief Executive Officer of Heirs Holdings Limited. He brings to the board experience spanning over three decades. Mrs. Uzoamaka Oshogwe is the Managing Director of AFRILAND. Mr. Ike Ogbue resigned in April 2018 while Mrs. Agatha Obiekwugo joined in October of the same year.

Investment Thesis
We believe that seeking more balanced revenue sources will help to reduce earnings volatility and deliver sustainable value to shareholders. Leasing and facility management could be a buffer when revenue growth from property sale and project development slackens. Both fee and rental income accounted for 94.5% of revenue in 2018 (2017:79.8%). Though revenue grew by only 1.9%, fees and commission from facilities management gained 20.3% compared to 4.7% of the year before. Project design and directorate which produced the bulk of fees and commission (2018: 84.4%; 2017: 80.3%) added 26.4% year-on-year. In addition, rental income on investment properties improved by 21.4% in the year under consideration. 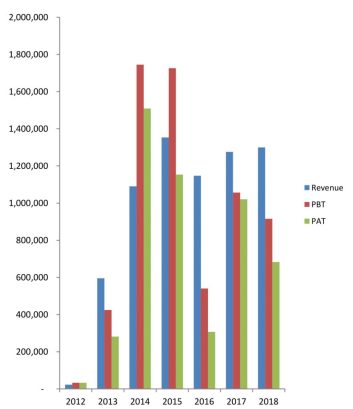 Investment properties, currently worth NGN10 billion, have risen by 20.3% on a 3-Year Compound Annual Growth Rate (CAGR) basis (2017:36.6%; 2016:45.5%). This will offer opportunity for recurring revenue from leasing. Profit margins are attractive to investors. Operating profit margin   and Profit Before Tax (PBT) margin were 63.4% and 70.5% respectively at the end of 2018.

Total debt has risen by 18.8% in the past three years. NGN1.8 billion of the loan has to be repaid within a year. Debt service cost and loan repayment impact profitability adversely. Although operating profit covers interest payment, AFRILAND has not been consistently generating positive cash flow to cover interest payments. Return on Average Equity (RoAE) and Return on Average Assets (RoAA) were 7% and 2.3% respectively at 2018 year end.

Presently, AFRILAND trades within our fair value estimate. We recommend a hold on the shares of the company.

Valuation
Book Value Per Share (BVPS) increased from NGN5.23 to NGN5.50. Earnings Per Share (EPS) of NGN0.38 trails its seven-year average by 100.2 basis points. AFRILAND trades at 6.3 times earnings and 0.4 times book value. EBITDA (Earnings Before Interest, Tax, Depreciation and Amortisation) margin was 64.9% down from 79.4%. We valued a share of AFRILAND between NGN2.3 and NGN3.9. A share of AFRILAND should produce a return of 34.9%.

Financial Overview
Revenue grew by 1.9% to NGN1.3 billion in 2018 compared to a revenue increase of 11.2% of the prior year. The slow revenue growth is attributable to sluggish growth in project development income and a huge drop in sale of inventory properties. Project development income rose from NGN57.5 million to NGN61.1 million gaining 6.3% year-on-year. Sales of inventory properties lost NGN190.5 million or 95% in the year under review.  Facilities management produced 56.5% of the revenue while rental income on investment properties accounted for 38% of total revenue.  Operating profit has lost 29.3% over the last three years. Administrative expenses as percentage of turnover rose from 50.1% to 62% causing operating profit margin to worsen; operating profit margin was 63.4%, down from 78.2%.  Profit Before Tax (PBT) and Profit After Tax (PAT) shed 13.3% and 33.2% year-on-year respectively. Profit margins declined; PBT margin lost 12.4% to close at 70.5%. Likewise PAT margin dipped by 27.5% to 52.5%.  Returns also dropped in the year under consideration; Return on Equity (RoE) was 6.8% and Return on Assets (RoA) was 2.1%. 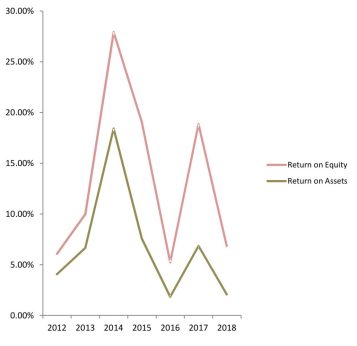 Total assets have grown at a 3-Year CAGR of 17.7% compared to 34.2% of the previous year. Similarly, shareholdersꞌ fund expanded by 7.6% over the past three years. However, total debt is increasing; it stood at NGN11 billion at 2018 financial year end compared to NGN9.3 billion of 2017. Total debt outgrew shareholders’ fund and accounted for 145.8% of shareholders’ fund. However, it formed less than 50% of total assets. We are of the opinion that the long-term solvency of AFRILAND has not been impaired.

Business Risk
Sluggish economic growth and dwindling purchasing power have adverse effects on revenue of AFRILAND. In other words, the performance of AFRILAND is tied to the Nigerian economic fortune which fluctuates with the vagaries of crude oil price. Also, the cost of borrowing and competitive pressure bear upon its earnings. 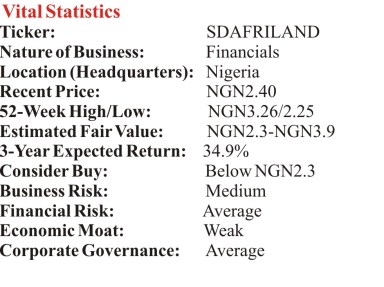