Company Overview
Berger Paints Nigeria Plc (BERGER), a paint manufacturer of premier rank, started paints manufacturing in Nigeria in 1959.  The company, which began as a private company, metamorphosed into a public company in 1973. Its shares were listed on the Nigerian Stock Exchange in 1974.   BERGER  prides itself on the production of decorative finishes, marine coatings, industrial coatings, automotive coatings, and wood finishes with leading brands such as Texcote, Luxol, and Super Star.

BERGER partnered with KCC Corporation (South Korea), a world-renowned chemical company, in 2012 to offer quality coatings to the marine industry. It has completed the automation of its plant; productivity and efficiency of its operation should improve going forward.

Investment Thesis
Innovativeness in developing new products and improving existing ones has led to the resilience of BERGER since its entry into the paints and allied products market. Despite the economic quagmire, BERGER is still able to grow both top- and bottom-line. Gross and net earnings have expanded by 4.8% and 5.6% respectively over the past six years. We are of the opinion that efforts of the management to reinforce its brand and widen its distribution network have been yielding fruits. Management has been paying dividends to shareholders regularly in addition to consistently growing shareholders’ fund over the years.

The company has been investing in plant automation. Consequently, the generation of free cash flow to shareholders by the company has been a herculean task. The newly completed automated factory has increased production capacity and we expect sales to increase as demand improves. A total of NGN566.2 million was added to Property, Plant and Equipment (PPE) in the year, compared to the previous year’s NGN334.6 million.

Management has not rested on its laurels. Apart from manufacturing, the company also engages in painting for customers and leasing its property in Abuja (Nigeria), The Berger Paints Plaza.  The company made NGN172.7 million from painting contracts in 2019 (2018: NGN59.5 million). The investment property, valued at NGN424.1 million at the end of 2019, has produced a total rental income of NGN301.8 million since it was completed in 2013. At present, the company derives all its revenue from Nigeria. In our opinion, the offshore expansion being pursued by the management would help to further diversify its revenue sources and reduce its business risk.

High costs are the bane of manufacturing in Nigeria. The total expenses of BERGER hovers around 90% of turnover.  We expect costs to drop soon as a result of the automation of its plant. Lower costs should improve profit margins that have been depressed up to now.

The company has a manageable debt level. The dividend yield averaged 7.1%. Investors should receive a total return of 46.3% in the next three years.

Valuation
A share of BERGER is worth between NGN9.30 and NGN11.10. Currently, it is trading below our fair value estimate. We recommend the shares to investors.

Financial Overview
BERGER’s revenue increased by NGN207.6 million in 2019 compared to an increment of NGN284.8 million in the previous year. Revenue from the painting contract contributed 54.5% of the revenue rise while the sale of paints and allied products was responsible for 47.7%. But rental income dropped 13.1% in the year under review. The sale of paints which made up 94.4% of gross revenue (2018:97.2%) grew by 3% year-on-year.   Profit Before Tax (PBT) and Profit After Tax (PAT) increased by 21.4% and 40% respectively.

The returns continued the upward trend which started in the 2017 financial year. Return on Equity rose from 11.4% to 14.6% while Return on Assets climbed up 1.8 percentage points.

Shareholders' fund of NGN3.1 billion in 2019  was equivalent to year-on-year growth of 9.3%. BERGER is a low-geared company and is not overburdened by debt obligations. Its profit and cash flow from operation can cover its obligations. In addition, its long-term solvency is not under threat.

Business Risk
Sluggish economic growth does have an unfavourable impact on earnings.  This, coupled with the high operating costs, would hurt profits and profit margins. 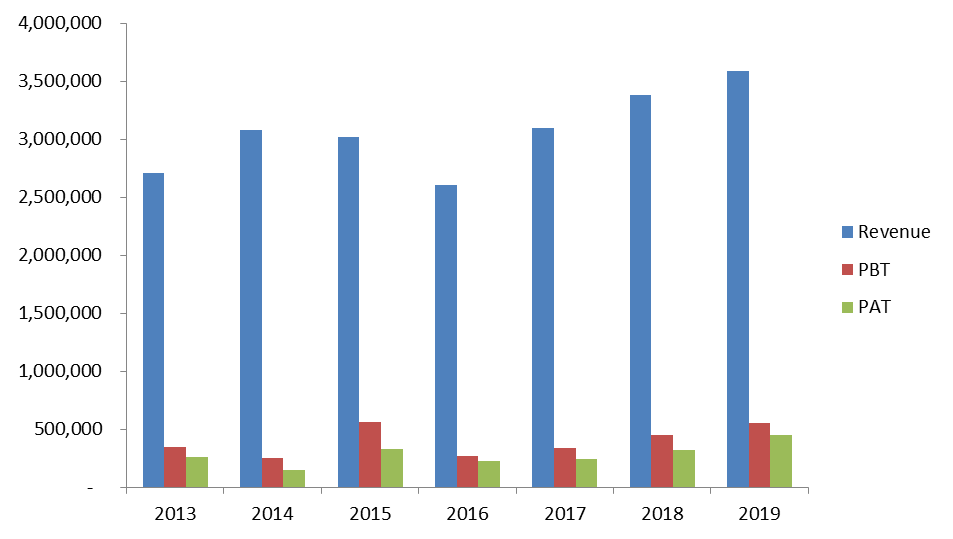 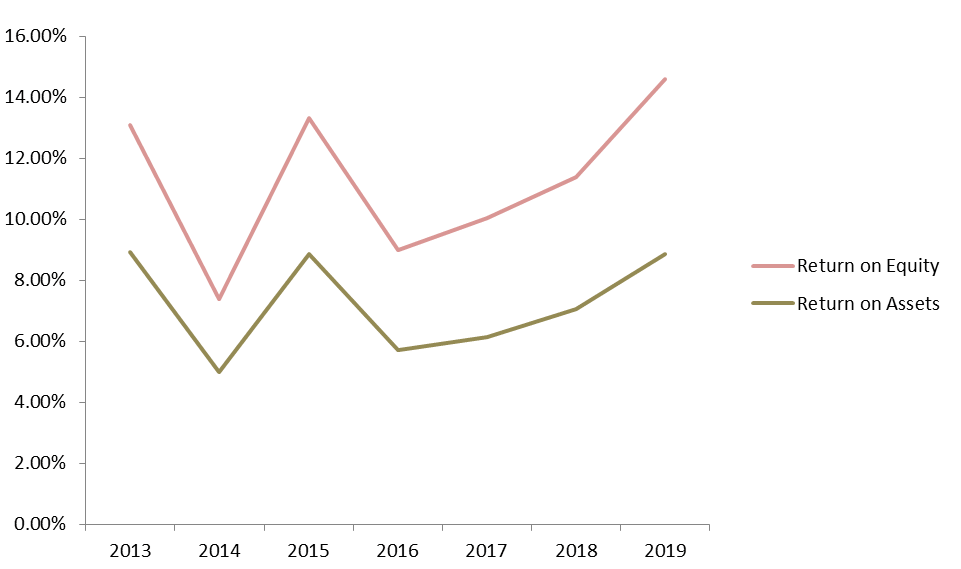