Company Overview
Bitfarms Limited (BITFARMS) is a cryptocurrency mining company that has its headquarters in Canada.  Though established in 2017, BITFARMS did not start trading on the TSX Venture Exchange (Canada) until July 2019.  Its shares were listed on NASDAQ (USA) in June 2021. Apart from making its servers available to miners who are fully occupied with confirming the validity of blockchain transactions, it also provides electric services to customers. BITFARMS is extending its services to South America and expanding its capacity in the existing facilities sited in Quebec Canada. Currently, it focuses on bitcoin production but there are other cryptocurrencies such as Ethereum and Bitcoin Cash. Bitcoin, a decentralised digital currency, was the first cryptocurrency to be released.

Wes Fulford resigned as chief executive officer in March 2020 and was replaced by one of the company’s founders, Mr. Emiliano Grodzki.  The executive chairmanship position is occupied by Nicolas Bonta, a co-founder. Jeffrey Lucas is the chief financial officer, having replaced John Rim who quit in August 2020.

Investment Thesis
BITFARMS’ revenue comes from its mining servers and electrical services. The electrical services business segment involves the sale, installation, repair and maintenance of electrical components. Total revenue grew at a compound rate of 1.3% over the past two years.  The gross profit margin averaged out to 22.3% for its server farms in the past two years while the average for electrical services was 18.2%. Though it relies on hydroelectricity, mining requires a lot of energy. The company is establishing operations in South America in order to lower its energy cost. This is expected to reduce the average cost of mining bitcoin which was about US$8,400 in the 1st quarter of the year 2021.

BITFARMS is aggressively pursuing its expansion strategy. It raised CAD$80 million in the 1st quarter of 2021 which was used for infrastructure expansion and working capital management. Capacity was raised as additional 4,500 miners were installed within the three months of the year 2021. The financial results for the quarter ended March 31, 2021 showed that there was a revenue surge from US$9.2 million to US$28.4 million. A rise in the market price of bitcoin was the major factor responsible for revenue increase. The gross profit and gross profit margin for the quarter were US$19.3 million and 68% respectively. But there was no net profit in the period as it declared a net loss of US$7.6 million compared to US$2.4 million net loss of the corresponding period in the previous year.

BITFARMS raised an additional CAD$75 million in May 2021. We applaud the company for ramping up capacity in order to take advantage of the rising popularity of cryptocurrencies around the globe. The maximum supply of bitcoins is fixed at 21 million and the rate at which it is produced is designed to drop by 50% at four-yearly intervals. BITFARMS is boosting capacity aimed at increasing output of its server farms as the next time the halving of bitcoin production rate will occur is the year 2024. Besides, the cryptocurrency ban in China drastically reduced the number of miners; this should be a boon to mining farms elsewhere including BITFARMS. We are of the opinion that blockchain technology, which powers cryptocurrencies,  offers significant opportunities in the changing financial landscape.

Valuation
We put a share of BITFARMS  at a value ranging from US$5.78 to US$8.72. BITFARMS is currently underpriced.

Financial Overview
Despite the effect of the COVID-19 pandemic in the year 2020, BITFARMS  grew its revenue by 7% to US$34.7 million. In contrast, revenue declined by 4.1% from US$33.8 million in the penultimate year to US$32.4 million recorded a year ago.  A 51.7% rise in the cost of sales resulted in a slump in gross profit.  BITFARMS’ gross profit in the 2020 fiscal year was US$2.9 million, down from US$11.4 million posted a year earlier. Energy and infrastructure is the major component of cost of sales. In 2020, it accounted for 57.5% of the cost of sales and 52.7% of total revenue. It was 55.6% of the cost of sales and 36% of total revenue in the preceding year.

BITFARMS could not sustain the turnaround in profitability that occurred in 2019 when it declared an operating income of US$1.4 million as against an operating loss of the year before it. The operating loss for 2020 was US$5.3 million. Loss before tax jumped to US$16.1 million, from US$0.5 million majorly due to interest on long-term debt. Net loss stood at US$16.3 million as at 31st December 2020. The two business segments of BITFARMS made a net loss in the year under consideration.

BITFARMS is still investing in capital in order to grow its capacity. Capital expenditure was US$4.5 million or 12.8% of revenue in 2020 compared to US$23.7 million or 73% of revenue in the prior year. Total assets have grown at a compound rate of 40.4% over the past two years while shareholders’ fund has declined by 13.5% in the same period.  Shareholders’ fund declined due to a rise in accumulated losses by BITFARMS.  Working capital was negative due to debt that needed to be repaid in the not too distant future.

Profit margins worsened in the year under review when juxtaposed with the year before it. The gross profit margin of 8.3% was tantamount to a year-over-year deterioration of 27 percentage points. Operating profit, income before tax and net income margins were all negative in 2020. Return on shareholders’ Equity dropped to -105.5% from the 7.5% achieved in the previous year. Return on Assets likewise shrank from 4% to -31.5%. Interest-bearing debt leaped by 27.9% year-over-year;  the debt exceeded the whole of shareholders’ equity and half of the total assets in the 2020 financial year.

Business Risk
Cryptocurrency is risky because of its unpredictability. A fall in the market price of bitcoin will adversely affect the earnings of BITFARMS as it derives revenue from bitcoins received from mining pools in exchange for computing services. Besides, cryptocurrency is unregulated and is attracting the attention of financial regulators. And operations may be restricted by regulatory actions. 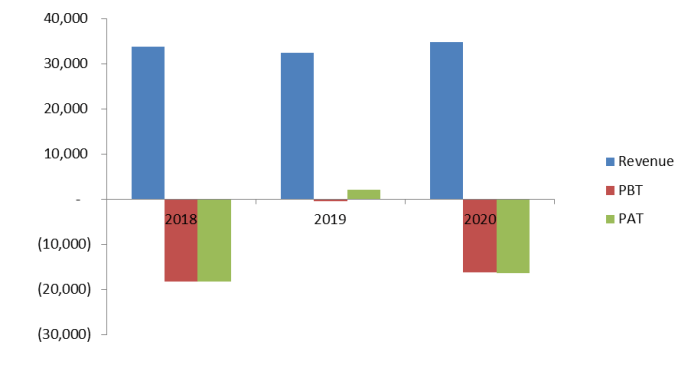