Though established on 2nd June 2008, CAVERTON started operations on 1st July  2008. The company provides charter, shuttle and maintenance services for helicopters and airplanes. It also engages in harbour and general marine operations. It was quoted on the Nigerian Stock Exchange in May 2014.  Tasmania Investments Limited holds 54% of CAVERTON’s issued shares; Mr. Makanjuola Aderemi has a 12% equity stake in the company while Molar Vessels Limited is in possession of  7% of its shares outstanding.

The board of directors of CAVERTON comprises ten members that perform its oversight functions. Mr. Aderemi Makanjuola chairs the board while Mr. Olabode Makanjuola, the chief executive officer, heads the management team. The directors have 18% equity participation in the company.

Investment Thesis
CAVERTON is an aviation and marine logistics company that has leveraged the Local Content Bill to build a robust client base in the oil and gas industry. Helicopter charter services have been responsible for over 90% of the company's total revenue and more than  80% of the total  Profit Before Tax (PBT) in the last eight years. Revenue from this business segment grew by a 3-Year Compound Annual Growth Rate (CAGR) of 14.8% in the year 2020  compared to 2019 when it rose by 20.5%.

Economic activities in the oil and gas industry slackened in the 2020 fiscal year due to the impact of COVID-19. This led to a decline in the performance of CAVERTON.  Revenue has gained 16.1% on a 3-Year CAGR basis even though it was down year-over-year. Earnings Before Interest, Taxes, Depreciation and Amortisation (EBITDA) has increased at a compound rate of 16.6% over the past three years. EBITDA margin for the year 2020 exceeded the average of 27.7% by 3.1 percentage points.

The cost control effort by the management is commendable. Caverton Aviation Training Centre was established to bolster revenue through the provision of ground and flight training services. Furthermore, the company has a presence in Cameroon and Ghana through Caverton Helicopter Cameroon, Caverton Aviation Cameroon and Caverton Offshore Support Group (Ghana) Limited. CAVERTON made NGN1.3 billion from markets outside Nigeria in the year under consideration (2019:NGN1.3 billion).  We do not expect the management to rest on its laurels. The business is capital-intensive and this bears on the ability of the company to generate free cash flow to shareholders.  Earnings growth and stability can be achieved by diversifying the revenue base and penetrating more countries outside Nigeria.

The company has a sizeable exposure to foreign exchange risk; most of its loans are denominated in US dollars. The settlement of debt obligations may erode the company’s liquidity and profitability against the backdrop of volatility in the oil and gas industry. Nevertheless, we believe that CAVERTON affords investors the opportunity to grow their portfolio going forward. Therefore, we maintain a buy position.

Valuation
The Adjusted Earnings Power Value of CAVERTON was  NGN2.83 while Book Value Per Share gained 2.3% year-over-year.  A share of the company has a fair value ranging from  NGN2.80 to NGN3.10.

Financial Overview
Revenue sank 8%  to NGN32.2 billion in 2020 compared to an 8.9% revenue boost in the previous year. However, revenue has expanded at a compound rate of  16.1% over the past three years.  Revenue fall was, to a large extent, caused by an 8.4% drop in helicopter charter services sales which accounted for 95.3% of revenue in the year under review (2019:93.1%).

Gross profit shed NGN1.1 billion or 7.7% year-over-year while gross profit margin was more or less flat at 42.2%. Pretax profit was NGN1.3 billion down from NGN7.2 billion of a year ago; this translated into a loss of 82.5% year-over-year. In the same manner,  Profit After Tax (PAT) fell by 73% to close at NGN1.2 billion at 2020 year-end.   Foreign exchange loss of NGN3.7 billion and an interest expense of NGN4 billion were responsible for a dip in profit.

Total assets and total equity rose by 2.5% and 2.3% respectively in the 2020 financial year compared to the earlier year. The bulk of the company’s finance is from debt. CAVERTON owed NGN28.4  billion in 2020  compared to NGN23.3 billion in 2019. Operating profit and operating cash flow covered interest payments 1.3 and 1.4 times respectively. Though the company generates enough profit and cash flow to offset debt obligations, the company is highly leveraged. Total debt has exceeded shareholders’ fund for ten consecutive years while total debt to total assets averaged 34.6% over the past 10 years.  In addition,  NGN13.7 billion or 48.4% of total debt has to be settled within a short time, thereby putting liquidity pressure on the company. However, we do not believe that the long-term solvency of CAVERTON is in doubt. 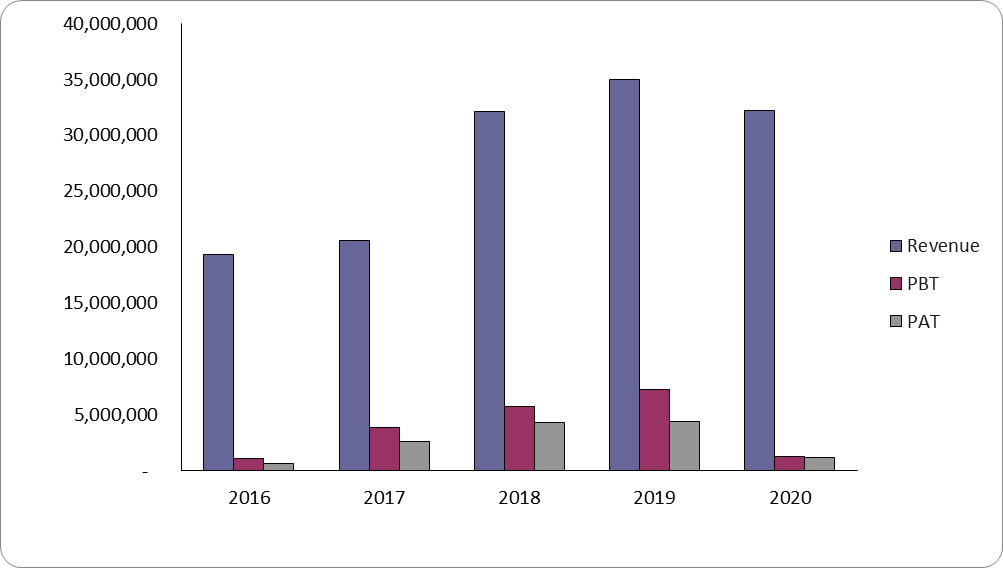 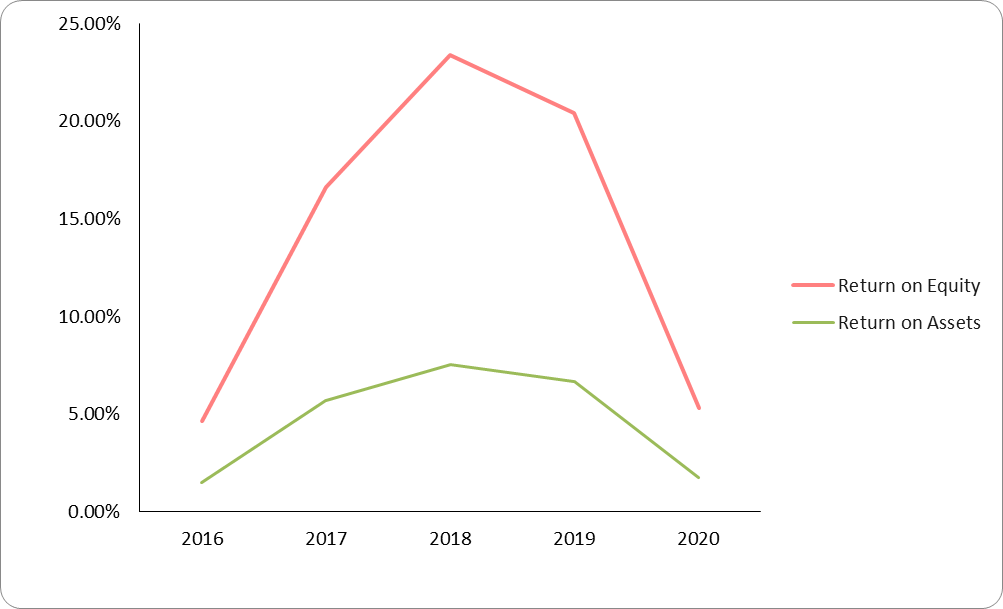