Company Overview
CSCS is a company that specialises in securities depository, clearing and settlement in the Nigerian Capital Market. CSCS, which serves the Nigerian Stock Exchange and NASD OTC Exchange, was established in July 1992. It, however, commenced business in April 1997. It was transformed into a public company and its shares are traded onompany invested in robust technology in 2017 to raise its capacity to process to millions of trades daily.

Mr. Omokayode Lawal retired from the board on 31st August 2018. Ms Tinuade Awe joined the board in April 2018. Haru NASD OTC Exchange.

The Nigerian Stock exchange and Artemis Limited are the major shareholders with equity stake of 27.2% and 20% respectively at the end of 2018.  The cna Jalo-Waziri is the chief executive officer while Oscar Onyema is the chairman of the Board.

Investment Thesis
The company depends on securities depository services and investment securities for the bulk of its gross earnings. Both have collectively produced, on average, 92.2%, of gross earnings in the past eight years. Clearing and settlement services, a core business operation, produced NGN4.6 billion in 2018 compared to NGN4.3 billion of prior year, gaining 6.7% year-on-year. Interest income from investment securities was more or less flat at NGN4.2 billion; but it has grown by 10.3% over the past three years. Investment securities moved up from NGN28.8 billion to NGN30.1 billion between 2017 and 2018. 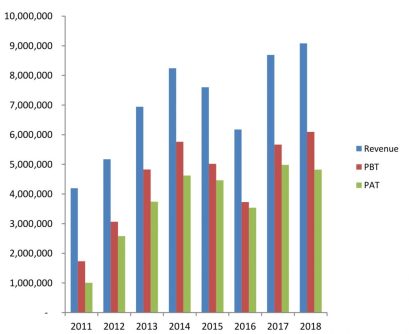 Fee from clearing and settlement of trades is largely driven by activities in the erratic stock market. We are of the opinion that the huge spending on investment securities has helped to stabilise the company’s revenue. And most of them are fixed income securities such as bonds and treasury bills with Federal Government of Nigeria (FGN) bonds accounting for 68.1% or NGN20.5 billion of investment securities. In addition, it is taking advantage of digital services such as disaster recovery and document management to broaden its revenue.

Good working capital management is a plus for the management and we have no reason to believe that the company is having liquidity problem. Current assets have always covered current liabilities. Cash and cash equivalents stood at NGN3.3 billion at 2018 year end while treasury bills were NGN6.2 billion.

CSCS has a strong balance sheet; it is neither capital-intensive nor burdened with debts. Profit margins are high and returns are encouraging. We are of the opinion that the companyꞌs prospect is not impaired.

Financial Overview
Gross earnings increased to NGN9.1 billion from NGN8.7 billion, gaining 4.5% compared to 40.8% of the previous year. This was due to slower growth in income from fee and interest which have produced, on average, 54.5% and 37.8% of revenue respectively in the last eight years. Fee income improved by only 6.7% in 2018 while interest income increased marginally by 1.3%. Though current ratio declined from 4.1 to 2.1 times, liquidity is not under threat.  The company is not burdened with debt obligations and long-term solvency is not in doubt.

Business Risk
CSCS makes, on the average, 54.5% of its revenue from securities clearing and settlement in the Nigerian Capital Market which is tied to the Nigerian economy.  The Nigerian economy is susceptible to both internal and shocks from factors such as crude oil fluctuations, policy inconsistency and political factors. 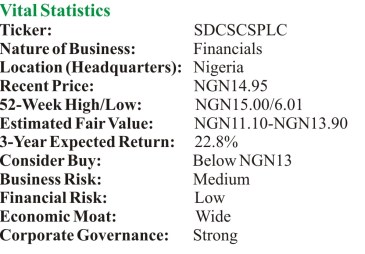