Currently, UAC of Nigeria Plc (UACN) is the major shareholder, controlling 51.5% equity stake in the company. CAP is authorised to produce and distribute the Dulux brand in Nigeria by ICI (now AkzoNobel United Kingdom). AkzoNobel, a multinational paint company, acquired ICI UK in 2008.

Investment Thesis
CAP is one of the major producers of industrial, protective and decorative coatings in Nigeria. It is the largest paint manufacturer quoted on the Nigerian Stock Exchange in terms of revenue and total assets. Revenue and total assets for 2019 were NGN8.4 billion and NGN6.8 billion respectively. Its profit margins rank high in the sector. Gross profit margin averaged 48.5% over the past six years. Operating profit margin of 24% and PBT margin of 30.3% trailed their six-year averages by 4.9% and 3% respectively.

CAP set the revenue record for the paint manufacturers in the building materials sector of the Nigerian Stock Exchange. The company has been able to produce attractive profit margins despite high operating expenses that have bedevilled manufacturing businesses in the country. Though dividend was not paid in respect of the year under review, the payout ratio had been encouraging. Management’s unrelenting determination to strengthen the company’s distribution network is commendable. Four additional Dulux Colour Centres (DCC) were established and nine DCC were upgraded in the year under review. DCC is the main distribution channel of CAP.  Selling and marketing expenses have grown at a compound rate of 20% over the last three years.

AkzoNobel and UACN offer the company immense technical leverage. Its association with AkzoNobel can be relied on to access both domestic and foreign markets with proven and longstanding brands. AkzoNobel has been in the business of making paints since 1792 and its products are being sold in more than a hundred countries. UACN, a foremost diversified company, offers commercial services to CAP. UACN is a holding company with investment in agriculture, consumer goods, logistics and real estate.

Valuation
The current market of NGN20.35 translates into 8.3 times average earnings and 6.8 times average book value. Our fair value estimate ranges from NGN19.50 to NGN24.5 per share. This means that the company’s shares are trading within our estimate.

Financial Overview
Revenue has grown by 7.3% in 2019 compared with 2.8% in 2018 on a 3-year Compound Annual Growth Rate basis (CAGR). The revenue increase was driven by a rise in sales volume. CAP’s gross profit increased in spite of a 10% hike in the cost of sales. Gross profit was NGN4 billion, up from NGN3.6 billion of a year ago. Selling and marketing expenses more than doubled while administrative expenses exceeded the previous period’s figure by 18.6%. Consequently, Profit Before Tax (PBT) and Profit After Tax (PAT) shed 2% and 14.2% respectively. The company declared a PBT of NGN2.5 billion in the 2019 financial statement compared with NGN2.6 billion made in 2018. PAT shrank, losing NGN287.3 million year-on-year.

Total assets, which have been rising, amounted to NGN6.8 billion; shareholders’ equity, by contrast, declined by 10.2% from NGN2.8 billion to NGN2.5 billion. CAP did not have any debt at the end of the 2019 year. Both current and acid test ratios stood at 1.4 and 1.2 times respectively.  The company can meet its obligations and generate enough free cash flow for the shareholders.

Business Risk
A lull in the economy, with its attendant effects on property development and purchasing power, is a disadvantage for the manufacturers of paints. In addition, the fragmentation of the business makes earnings and profit margins vulnerable. 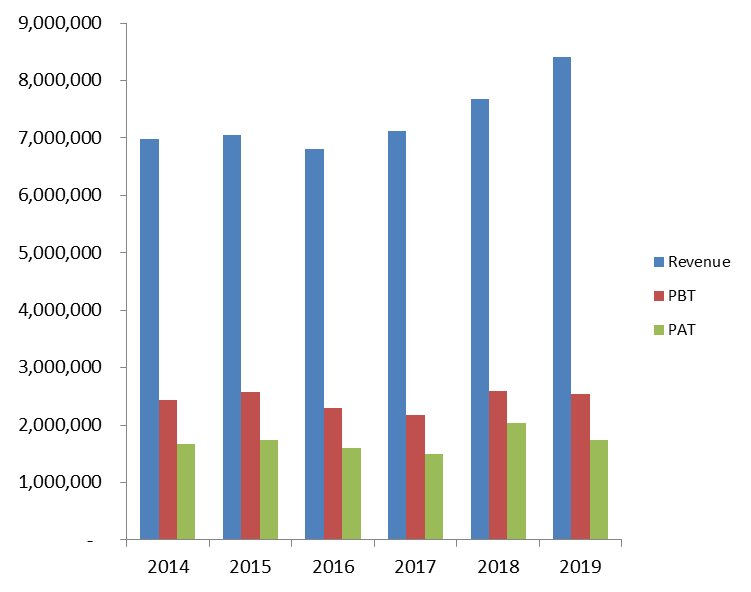 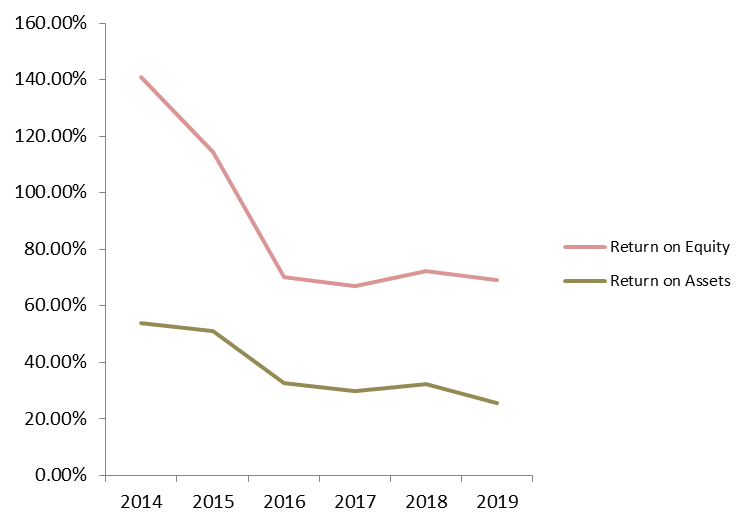