Company Overview
Dangote Cement Plc (DANGCEM) was established as Obajana Cement Plc on November 4, 1992. However, the company did not start operations until January 2007. The present name, Dangote Cement Plc, was adopted in July 2010. DANGCEM, listed in October 2010, is the most capitalised company on the Nigerian Stock Exchange. DANGCEM produces cement and related products in facilities situated in ten African countries. It operates three plants in Nigeria, where it is headquartered.

Dangote Industries Limited (DIL) is the holding company of DANGCEM. DIL began in 1981 as a trading company importing commodities such as cement, flour, rice, and sugar. The group has been transformed into a manufacturing conglomerate with interests in building materials, food products, refinery, petrochemicals, agriculture, fertilizers, infrastructure, and property management.

Investment Thesis
DANGCEM is an integrated multinational company with substantial limestone reserves.  The company stands to benefit from the housing and infrastructural deficit in Africa. It operates the largest cement plants in the two most populous countries in Africa of Nigeria and Ethiopia. Though they contribute positively to revenue (about 30% in the past five years), the profitability of the operations outside Nigeria has been unstable.

DANGCEM has plants in Benue, Kogi, and Ogun States in Nigeria. Nigeria is responsible for about 70% of revenue and 90% of Earnings Before Interest, Tax, Depreciation and Amortisation (EBITDA). Profit margins from its Nigerian operations are appealing; the EBITDA margin has averaged 61.3% in the past five years. The cement plant in Obajana, Kogi State in Nigeria is the largest cement plant in Sub-Saharan Africa. DANCEMꞌs distribution network gives it an edge in the marketplace. We believe that the Nigerian governmentꞌs resolve to continuously increase capital expenditure is a boon to cement manufacturers, including DANGCEM.

DANGCEM has grown revenue by 16.9% over the past seven years. Besides, the company offers investors attractive returns. It pays dividends to shareholders regularly. DANGCEM has been increasing its assets. Total assets were NGN1.7 trillion at end of the 2019 financial year. The free cash flow of NGN249.1 billion translates to NGN14.6 per share and a year-on-year increase of 2%.

Valuation
Average Price/Earnings ratio (P/E) of 15.4 multiplied by average Earnings Per Share (EPS) of NGN11.8 gives a price of NGN181.7. Adjusted Earnings Power Value (EPV) is NGN78.7 while Forward P/E is put at 13.4 times. Our Discounted Cash Flow (DCF) model produced a fair value ranging from NGN162.8 to NGN181.5 per share while our 2-Stage Dividend Discount Model (DDM) generated an estimate between NGN162.7 and NGN180.6 for a share of the company.

Therefore, at the current market price of NGN149.3, the shares of the current appear undervalued.

Nigeria produced 68.3% of revenue; besides, it accounted for 88.3% of EBITDA. Nigeriaꞌs EBITDA margin stood 59.2% while the rest of Africa had an EBITDA margin of 16.9%. The operations outside Nigeria have been having difficulty contributing positively to profitability. They recorded a Loss After Tax of NGN85.3 billion (2018: -NGN87.9 billion).

Current liabilities have been exceeding current assets for the past nine years. In other words, DANGCEM has been having negative working capital. It was indebted to the tune of NGN367.9 billion at the 2019 year-end. Over 70% of debts are expected to be repaid within a year, nevertheless it generates enough operating profit and cash flow to pay interest on loans. Profit and cash flow from operations covered interest payments 5.2 and 7.4 times respectively. The company is not highly geared as total debts formed 21.1% and 41% of total assets and shareholdersꞌ fund respectively. Shareholdersꞌ fund declined by 9% compared to a 26.3% increase in the prior year. Total assets witnessed a marginal improvement of 2.8% to NGN1.7 trillion.

Business Risk
Demand for building materials, including cement, could change due to varying economic circumstances. When the economy takes a downswing, buyers (corporate and individuals) delay capital investment; consequently, demand for cement plunges. In addition, energy and raw material costs have a considerable effect on the profit margin.  DANGCEM incurred NGN240.1 billion or 63.2% of the production cost of sales on energy and materials in 2019 (2018: NGN256.1 billion). Non-compliance with regulatory requirements may lead to the shutdown of plants and loss of revenue. 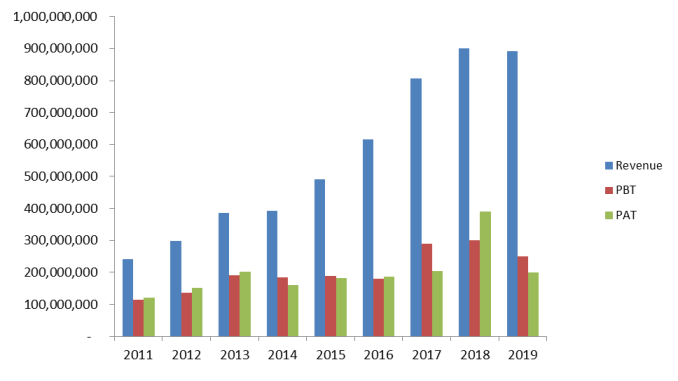 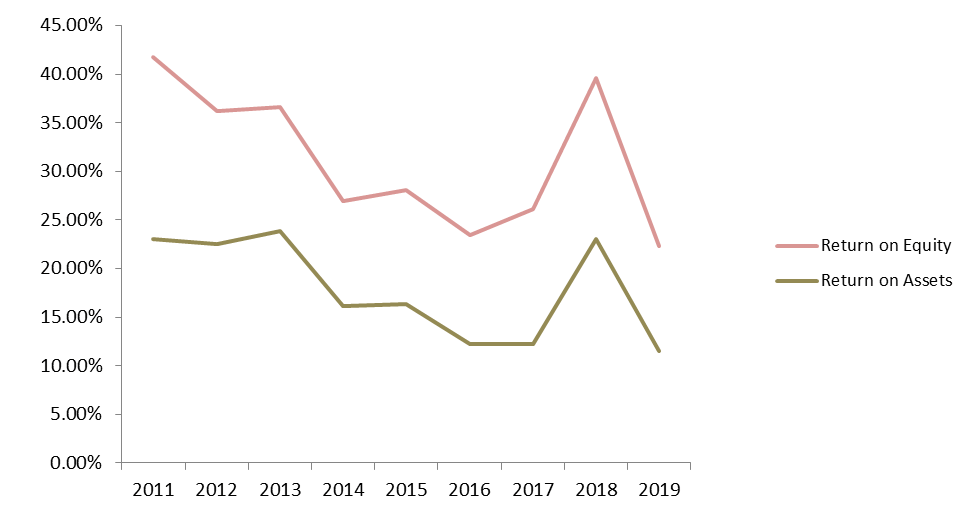