Company Overview
Ghana Milk Company Limited was established in January 1960 to produce and market milk products in Ghana. It went bankrupt in 1962. FML emerged from the defunct Ghana Milk Company Limited in 1962 in a bid to resuscitate the company. The company was changed to a public limited company seven years after and was listed on the Ghana Stock Exchange on October 18, 1991.

FML prides itself on the production and distribution of dairy products and food drinks such as FanIce, FanYogo and FanChoco. The management grows the business internally by continuously investing in production and distribution facilities. The company expended GH¢49.1 million in 2017 on property, plant and equipment ( 2016: GH¢107.8 million). Also, distribution expenses increased by 26.7% from GH¢85.4 million to GH¢108.1 million between 2016 and 2017. The company sells its products through distributors and agents who are trained from time to time in order to improve customer  service and create brand preference. Fan Milk International A/S (Denmark), its parent company, controls 56.6% of the equity stake of the company. Dr. Charles Mensa (Ghanaian) occupies the position of the chairman of the board while Stephane Couste (French), the managing director, leads the management board of FML.

Investment Thesis
The decision not to pay dividends in 2017 and 2018 is a plus for the management. It would reduce company's dependence on loans to finance its expansion activities. We are of the opinion that management's capital investment would strengthen FML's productive capacity and distribution network. And shareholders would benefit from appreciation of their investments going forward. In addition, debt obligations will not erode profits and assure of future dividends. Revenue and Earnings Per Share (EPS) have been grown by 23.2% and 14% respectively in the last seven years on a Compound Annual Growth Rate (CAGR) basis.

Though increase in costs impacted profit margins and returns negatively in 2017, shareholders have been enjoying good returns over the years. However, the current trading price of GH¢13.7 is above our estimated fair value of the company's shares. Expected return is 46.5%. 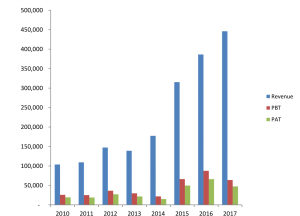 Valuation
Adjusted P/E of FML is 45.6 times. It is trading at 7.2 times its year end book value and 3.6 times year end sales. We put its Earnings Power Value at GH¢3.80 and EBITDA margin went down to 16.9% from 24.2%. We arrived at an estimate ranging from GH¢5.2 to GH¢7.4 per share. FML appears overpriced from our valuation and trades at hefty premium to its intrinsic value.

Financial Overview
It has grown top line by 36% on a three-year CAGR basis. Despite a 5.9% rise in gross profit, operating profit shed 31.8%. This is partly due to a 26.7% hike in distribution cost. Distribution cost is responsible for 24.3% of turnover while distribution cost as a percentage of turnover increased by 2.2% in the year under review. Profit Before Tax (PBT) declined 27.1% in 2017 compared to 31.9% rise of a year ago. Though Profit After Tax (PAT) lost 28.5% on a year-on-year basis, it has increased by 46.5% over the past three years. Shareholders' fund more than quadrupled in the past seven years; on a year-on-year basis it jumped from GH¢174.4 million to GH¢221.7 million, gaining 27.1% compared to 45% growth of the previous year.

Though the company had been generating positive cash flow, the company found it difficult to generate a positive free cash flow in 2016 and 2017 due to capital investment. Capital spending per share in 2016 and 2017 were GH¢0.93 and GH¢0.42 respectively. Total assets are growing; it added 34.3% in 2017 on a 3-Year CAGR basis. The company has been conservatively financed and is low-geared. The company has no bank loans and enjoys substantial trade credit from members of the group. Trade and other receivables, which have been going up, leapt from GH¢11.1 million to GH¢27.7 million. And they accounted for 23.8% of current assets as against 12.4% of the year ago, i.e. 2016.   Trade receivables have risen by 13% in the past three years. In addition, 12.7% of  trade receivables were bad  in the period under consideration. The company made a provision for impairment of 14% on trade receivables compared to 28.5% of the previous year. FML holds agents' savings as security for trade receivables. Current ratio averaged 1.9 times and debtors have been settling their debts in less than one month while the company enjoys favourable credit terms from its creditors. We do not have any reason to believe that FML would find it difficult to meet its obligations or run into liquidity problem. Moreover, it's long term solvency is not questionable. 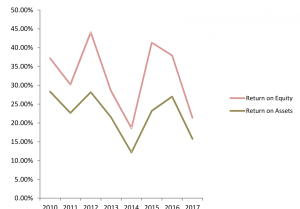 Business Risk
FML faces exchange risk as it imports raw materials, spare parts and equipment. Foreign exchange loss in the year amounted to GH¢6.2 million (2016: GH¢2.6 million). Raw materials and consumables formed, on average, 34.9% of revenue between 2010 and 2017. Its extensive distribution network gives it an edge in the industry. However, the company cannot be isolated from Ghana's macroeconomic environment which may eat at consumers' income and purchasing power, thereby reducing the company's earnings. 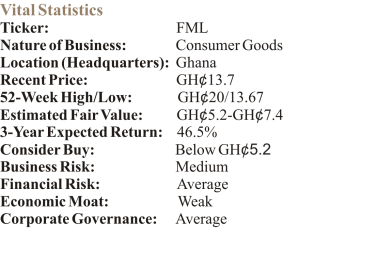