Company Overview
Though First City Merchant Bank (FCMB) was incorporated as a private limited company on 20th April 1982, it was not licensed until August of the following year. In 2001, it became a universal bank and was renamed First City Monument Bank. It went public in 2004 and got its shares listed on the Nigerian Stock Exchange in the same year. FCMB acquired Nigerian-American Bank Limited, Midas Bank Limited and Co-operative Development Bank Plc in the wake of the banking consolidation of 2005. Also, it acquired FinBank Plc in February 2012 and Legacy Pension Managers Limited (now FCMB Pensions Limited) in 2017.

The major shareholders of FCMB are Capital IRG Trustees Limited and Stanbic Nominees Nigeria Limited. Together they accounted for 20.4% of the company’s equity stake (2019: 21.3%). Domestic investors have 86.5% (2019:74.1%) equity participation in the company.

Mr. Oladipupo Jadesimi is the chairman of the board of directors while Mr. Ladi Balogun is the Group Chief Executive.  Messrs Olutola Mobolurin and Olusegun Odubogun left the board in the year 2020. Mrs. Tokunboh Ishmael joined as a non-executive director in April 2020.

Investment Thesis
FCMB is becoming a one-stop financial services provider with revenue coming in from investment banking, asset management, SME banking, commercial banking, corporate banking, personal banking, institutional banking, and treasury & financial markets business divisions. Most of the revenue comes from SME and personal banking segments with both generating over 60%, on average, of gross earnings in the past four years. Despite contributing about 7% of gross earnings, the treasury & financial markets segment has been yielding close to 39% of Profit Before Tax (PBT) over the past three years.

It is pertinent to state that the SME and Personal banking business segments have been eroding shareholders’ wealth even though they are responsible for the bulk of the revenue of FCMB. Both segments caused a NGN579.5 billion deterioration in shareholders’ fund in 2020 compared to NGN429.8 billion in the prior year. Corporate banking and treasury & financial markets account for most of the shareholders’ fund. However, corporate banking has not produced a positive PBT in the past four years. The corporate banking unit serves large companies while treasury & financial markets provides funding support for businesses.

FCMB is diversifying its income base and leveraging the competence of its non-banking subsidiaries such as CSL Stockbrokers Limited (CSLS) and FCMB Pensions Limited (FPL). CSLS, one of the top stockbroking firms, was established in 1977. CSLS, together with its subsidiaries (CSL Capital UK Limited and FCMB Asset Management Limited) posted a PBT of NGN1.7 billion in 2020. FPL’s Assets Under Management was NGN366.5 billion, up from 2019’s NGN318.6 billion.

The quality of its loan portfolio looks good. Most of its loans are given to corporate customers; the retail end of the market got only NGN136 billion or 15.6% of total loans and advances to customers (2019: NGN109.3 billion or 14.5% of gross loans).  Although they are lucrative, retail loans come with some risks. Loan loss provision for this category stood at 7.7% as against 7.3% in the previous financial year. Non-performing loan on loans to individuals was NGN9.1 billion (2019: NGN8.2 billion); it was equivalent to 31.7% of total non-performing loans in 2020 compared to 29.7% in the previous year. We expect the default rate to rise.  It is against the backdrop of the under-collaterisation of personal loans and dwindling economic fortunes that we put forward our opinion.

Also, the bank grants a lot of credit facilities to the volatile oil and gas sector of the economy. Total gross loans to the sector were up 15.9% year-over-year to NGN251.4 billion.  The upstream sub-sector got NGN46.9 billion amounting to 18.7% of total gross loans to the sector (2019: 59.6%). This sub-sector poses more risk than the downstream subsector. Besides, it could impair the quality of the loan portfolio of FCMB and it may have to write off a substantial amount as bad debt to clean up its books going forward. Though it is solvent, FCMB should watch its liquidity position closely.

Valuation
FCMB has a per-share value between NGN7.47 and NGN10.15. FCMB stock, to a great extent, is undervalued when our fair value estimate is compared with the current market price.

Financial Overview
Gross and net earnings increased by 6.2% and 8.9% respectively, on average, over the past seven years. Revenue grew by NGN18.2 billion in 2020 while Profit After Tax (PAT) increased by NGN2.3 billion in the same year. This was tantamount to a year-on-year increment of 10% in revenue and a 13.1% boost in PAT in the year under consideration. The revenue gain was largely due to a 9.9% rise in interest and discount income.  Personal banking, which caters to individuals, has been the highest contributor to revenue in the last few years. Revenue from personal banking jumped from NGN45.3 billion in 2019 to NGN55.1 billion in 2020. SME banking is the next best in terms of revenue, raking in NGN22.6 billion in 2020 (2019: NGN26.9 billion). But investment banking recorded the highest year-over-year revenue growth of 189.5% to NGN16.6 billion.

Profit margins improved; net interest margin was 45.5% up from 41.9%; PAT margin was 9.8% compared to 9.6% of the previous year; however, PBT margin of 11% was slightly lower than what was achieved a year earlier. Shareholders’ fund surpassed NGN200 billion for two consecutive years.  And customers’ deposits swelled by 33.3% year-over-year to NGN1.3 trillion. Retail deposits average out to 69.4% of total customers’ deposits. Besides, customers’ deposits outgrew customers’ loans; deposits have increased by 22.1% while gross loans have expanded by 8.8% on a 3-Year CAGR basis. The gross loans to deposit ratio was 69.2% in 2020 (2019: 80%).

Business Risk
Suffice it to say that COVID-19 has a far-reaching effect on the global economy. Banks may find it difficult to attract deposits; delinquency may rise as debtors fail to meet up with debt obligations. Consequently, interest income may be harmed.  FCMB has a weak competitive advantage relative to its peers. However, it could leverage on the goodwill of its non-banking subsidiaries to nudge up its earning capacity and deliver a good return to shareholders. 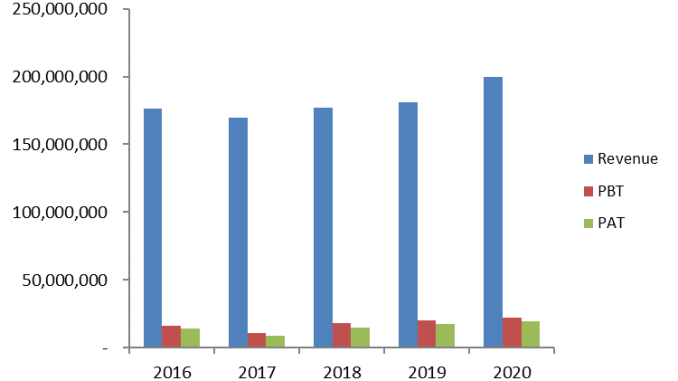 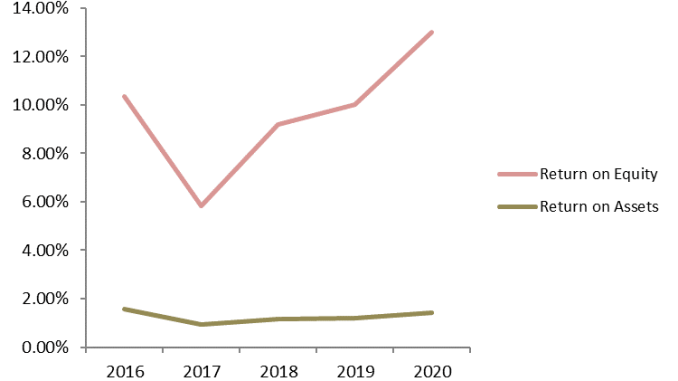