Company Overview
Fidson Healthcare Plc (FIDSON) began distributing pharmaceutical products in March 1995 but commenced local manufacturing in July 2002. It was transformed into a public limited liability company in 2008 and got its shares listed on the Nigerian Stock Exchange in the same year.

FIDSON has been investing in capacity upgrade and research in order to improve its processes and products. Product development has improved its offerings. It partners with both overseas and domestic companies in order to strengthen its product portfolio and distribution network.

Investment Thesis
Ethical (prescription) drugs and Over-the-Counter (non-prescription) drugs have been responsible for 99.4% of revenue. Besides, both business units are expanding; revenue from the ethical unit has grown by 39.6% while revenue from the Over-The-Counter (OTC) unit has risen by 9.9% over the past three years. The consumer segment, which was recently introduced, has had a revenue decline of 70.7% on a 3-Year Compound Annual Growth Rate (CAGR) basis.

We expect the contract manufacturing adopted by FIDSON to increase capacity utilisation and drive down costs. Operating costs hover around 86% of turnover and operating profit margin averaged 14%. Sub-Saharan Africa offers (SSA) attractive opportunity for pharmaceutical companies since SSA countries depend on the importation of pharmaceutical products to complement domestic production. FIDSON can use this opportunity to its advantage by exporting its products to foreign markets in SSA.

High operating costs, high interest and low-profit margins have plagued the manufacturing industry in Nigeria. FIDSON has benefitted from various government policies aimed at ensuring access to cheaper funding and encouraging local production. It has enjoyed low-interest loans granted by The Federal Government of   Nigeria through the Central Bank of Nigeria and the Bank of Industry. These loans have helped the company to increase capacity, modernise its manufacturing facilities and increase working capital. As a result of government intervention, FIDSON earned an income of NGN159.6 million in the year under review (2018:NGN141.7 million). In other words, 53.8% of other operating income in 2019 (2018:57.2%) arose from government intervention.

Earnings Before Interest Taxes Depreciation and Amortisation (EBITDA) margin has increased from 15.7% in 2018 to 19.4% in 2019. Regular investment in capital should yield fruits going forward. We anticipate capital appreciation in addition to consistent dividend payments from FIDSON.

Valuation
FIDSON trades at 15.5 times average Earnings Per Share (EPS) and 1.1 times Book Value Per Share (BVPS).  A share of the company ranges from NGN4.20 to NGN6.20.  The dividend yield of 4.8% achieved at the end of the 2019 financial year surpassed the 8-year average dividend yield by 10 basis points (0.1%).  Investment in the company’s shares should generate a return of 27%.

Financial Overview
Despite a 13.4% year-on-year decrease in 2019, revenue has grown by 22.5% compared to 25.5% of a year before on a 3-Year CAGR basis. The ethical unit produced NGN7.9 billion; a 13.5% decline compared with the previous period’s leap of 35.6%. The OTC unit recorded a revenue decrease for the second consecutive year. The cost of sales decreased to NGN8.2 billion from NGN9.9 billion, resulting in a 2.8% drop in the cost of sales to turnover ratio. Notwithstanding the fall in the cost of sales, FIDSON’s gross profit shrank 7% from NGN6.3 billion to NGN5.9 billion. The gross profit margin, however, added 2.8% to reach 41.8% as at 31st December 2019.

The total assets of NGN20.4 billion were marginally lower than the previous year’s value of NGN20.5 billion. But Return on Average Assets (RoAA ) improved; it was 2.1% in contrast to  -0.4% of the preceding period. Total equity jumped 34.5% to NGN9.6 billion on account of the issue of additional shares (rights issue). Return on Average Equity (RoAE) was 5.2%, up from -0.9%.

Debt swelled to NGN6.6 billion in 2019; interest cover was 1.1 times while the current ratio was 1.2 times. Nevertheless, FIDSON remains solvent as it is capable of meeting its financial obligations.

Business Risk
Earnings are vulnerable to attack by both domestic and foreign pharmaceutical companies. In addition, high costs can erode profits and profit margins. 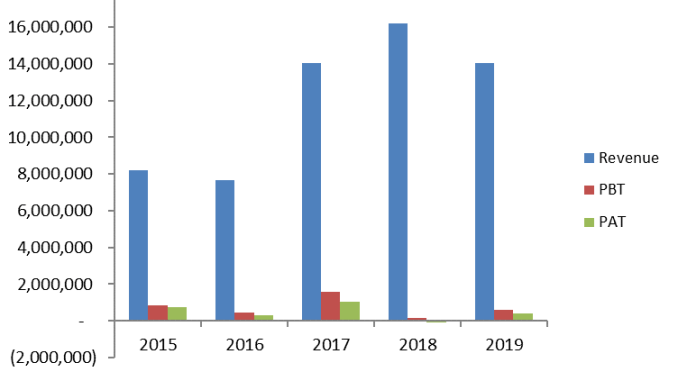 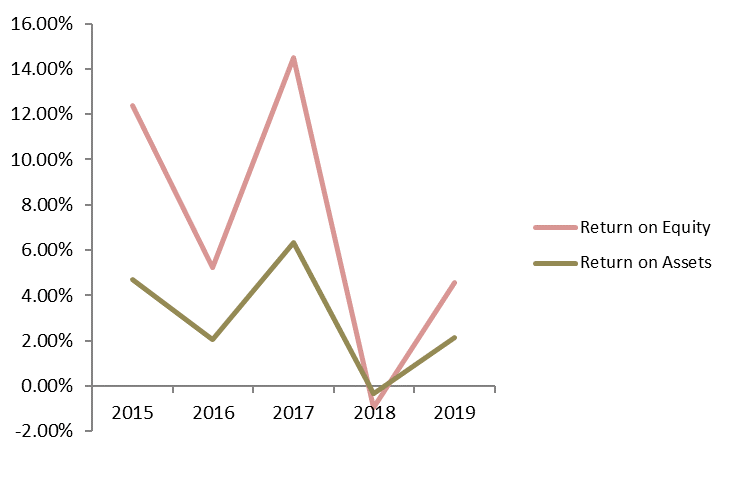