The company continuously upgrades its capacity while leveraging on the technical expertise of its technical partners for the installation and maintenance of its mill. Siloam Global Services Limited controls a 74.6% equity stake in the company while First Bank of Nigeria Limited holds 5.1% shareholding.

Dr. Oba Otudeko chairs the Board of Directors of HONYFLOUR. Mr. Olanrewaju Jaiyeola rose through the ranks to become the Managing Director in 2014; he retains his position and brings his experience to bear on the company. Mr. Sikiru Rufai, a non-executive director, retired on 1st April 2019.

Investment Thesis
Though it has one of the leading brands, HONYFLOUR has been having difficulty growing profits consistently. Sales revenue has grown at a Compound Annual Growth Rate (CAGR) of 14.8% over the past three years (2019:13.5%). However, net profit has lost 45.3% over the past three years (2019: -160.8%). Debts are mounting while massive capital investment impacts negatively on free cash flow. We are of the opinion that capital investment could pay off going forward.

There was a slight improvement in performance when the year 2020 was juxtaposed with the year before. Total costs as a percentage of turnover shed 2.6 percentage points. Profit margins stepped up; gross and operating profits got better by 176 and 173 basis points respectively. Earnings Before Interest, Taxes, Depreciation and Amortisation (EBITDA) rose by NGN2.8 billion in 2020 in contrast to the prior period in which it fell by NGN5.8 billion; as a result, EBITDA margin went up from 8.8% to 11.7%.

Quarter 2 results to 30th September 2020 showed that revenue increased by 44.3% over the corresponding period of the previous year. An operating profit of NGN3.6 billion was declared and it represented a rise of 21.1% year-over-year. And net profit gained NGN14 million to NGN204 million as at 30th September 2020. Total debt stood at NGN55.8 billion, down from NGN58.3 billion recorded at end of the preceding fiscal year (31st March 2020).

HONYFLOUR is not immune from the high operating expenses bedevilling the manufacturing sector of the Nigerian economy. The rising cost of sales has been a major factor responsible for depressed profit margins. The COVID-19 pandemic is also taking its toll on individuals and businesses; we believe that the results of HONYFLOUR  will continue to be affected as the epidemic ebbs away.

The management’s resolve to restructure or refinance the company’s debt is a welcome relief.  Restructuring or refinancing will reduce liquidity pressure on HONYFLOUR and prevent it from heading into choppy waters. At present HONYFLOUR trades below our fair value estimate. Our recommendation is a hold on the stock of the company.  We will, however, keep tabs on HONYFLOUR to see how things pan out in the medium term.

Valuation
HONYFLOUR has adjusted Book Value Per Share (BVPS) and Earnings Per Share (EPS) of NGN4.42 and NGN0.23 respectively. The Price/Earnings (P/E) ratio was 10.1 times at year-end while Earnings Power Value was NGN1.53. We have valued HONYFLOUR at a value ranging from NGN2.40 to NGN4.00 per share.

The high cost of sales was largely responsible for low-profit margins. Profit margins improved in the year under review, even though they were low. The operating profit margin stood at 6.8% having gained just 1.7 percentage points. PBT margin went up from 0.8% to 1.6%.  Similarly, a PAT margin of 0.8% was recorded compared to 0.1% of the previous year. Total assets and shareholders’ fund have grown by 7.9% and 3.1% respectively over the past three years. EPS declined to NGN0.08 from NGN0.09. BVPS inched up to NGN7.22. Returns to shareholders have weakened. Return on Equity (RoE) of 1.1% trails the ten-year average of  5.9%.  Return on Assets (RoA) has been less than 1% in two consecutive years. Trade receivables climbed 22.9% year-over-year from NGN4.3 billion to NGN5.3 billion. About 9% of trade receivables may be lost (2019: 12%). Net current assets have been negative for nine straight years.

Total borrowings were NGN58.3 billion at the 2020 year-end and they amounted to 41% of total assets and 101.8% of total equity. NGN31.5 billion or 54.1% of the loans have to be repaid within a short period of time. Operating cash flow and operating profit could only cover interest payment 1.3 times each.. Current and acid-test ratios are low. The company may find it to meet its maturing short-term obligations. HONYFLOUR’s long-term solvency is not in doubt. But we are of the opinion that management should pay down its debts and embark on better working management to improve the company’s financial position.

Business Risk
The high cost of sales is the bane of the industry. Investment in capital increases indebtedness and adversely affects profitability.  Competition is stiff in the industry and HONYFLOUR has a weak economic moat. 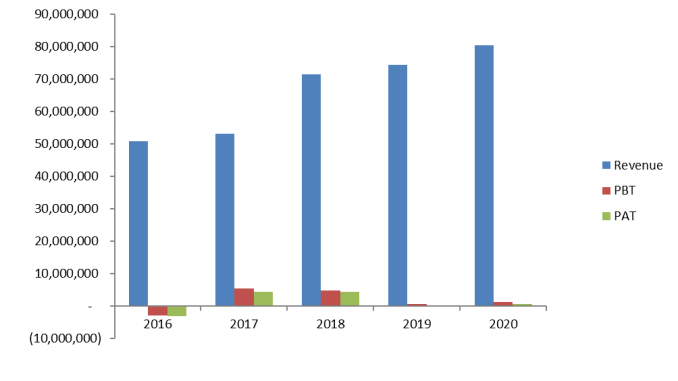