Company Overview
JOHNHOLT which began the business of distribution and exporting produce in Lagos in 1897 has grown to a conglomerate distributing a wide range of consumer and industrial products such as high capacity generators, air conditioners, fire-fighting equipment, boats, transformers and gas generators. It became an incorporated business, John Holt Limited, in Nigeria in August 1961. In 1974 its shares were listed on the Nigerian Stock Exchange. JOHNHOLT is also engaged in oil and gas, warehousing, inventory management, property management, construction, fabrication and marine leasing.

JOHNHOLT is a subsidiary of John Holt & Company (Liverpool) Limited, United Kingdom which is in possession of 52.97% of its total outstanding shares. It has two subsidiaries of John Holt Construction Limited and John Holt Oil and Gas Limited. JOHNHOLT enjoys technical assistance from its partners which include Rosenbauer, Horus Energia and Angus Fire.

Chief (Dr.) Christopher Ikechi Ezeh is the chairman of the board of directors while the management team is headed by Dr. Christopher Ezeh, the managing director of the company.

Investment Thesis
The gross earnings of JOHNHOLT have diminished at a three-year Compound Annual Growth Rate  (CAGR) of 7.1% while Profit After Tax (PAT) declined at a CAGR of 22.3%. Sale of finished goods which amounted to NGN1.3 billion increased by 6.9% year-over-year while property rent and warehousing added 5.6% from NGN284 million to NGN300 million within a year. However, revenue from services and repairs lost 27.9% from NGN244 million in 2019 to NGN176 million in 2020. Revenue from direct leasing has shown a downward trend in the past seven years; it declined from NGN256 million in 2013 to NGN4 million in 2020.

Though earnings growth has been unstable, we believe that the property, warehousing and central business unit is promising. With assets of NGN8.8 billion, this unit accounts for 84% of total assets. Despite producing 16.4% of total revenue or NGN300 million in 2020, it was responsible for 51.9% of total gross profit. Its gross profit margin for the year under consideration was 64% unlike 20.2% for the whole company.

JOHNHOLT has been finding it difficult to generate operating profit and cover its interests. Its debt has gone down over the years.  It paid down the debt from N3.7 billion in 2012 to NGN86 million at 2017 financial year-end, but it had risen to NGN938 million as at 31st December 2020.   High costs have been responsible for the company's inability to grow its net earnings consistently. With total assets in excess of NGN10 billion, we believe there is adequate cover for the creditors of JOHNHOLT. Working capital management has improved. Besides, it is supported by its parent company and its bankers which makes settlement of creditors possible.  Though its operating profit could not meet its debt obligations, JOHNHOLT in our opinion does not have a long-term solvency problem.

We would like to maintain a hold recommendation even though JOHNHOLT trades below our estimated fair value. And we will keep a watch on the company to see how the management turns around the business.

Valuation
We have valued JOHNHOLT  and arrived at an estimate ranging from NGN4.38 to NGN5.20 per share. At the current price of NGN0.73, a share of the company is trading at a hefty discount to our estimated value. A return of 117.2% is anticipated on investing in the company’s shares.

Financial Overview
Revenue expanded from NGN1.79 billion to NGN1.83 billion gaining 2.1% year-over-year. This was largely driven by the growth of two business segments of  JOHNHOLT, namely Yamaco segment and property, warehousing and central segment. Its main business segment which involves the sale and leasing of technical products such as generators, Holt Star air conditioners, and fire-fighting equipment lost revenue of 0.9% year-over-year. This segment, on average, accounts for 77.7% of revenue and 10.5% of total assets.

Gross profit margin decreased from 25.2% to 20.2% owing to a rise in the cost of sales to turnover ratio by 5%. JOHNHOLT had an operating loss of NGN255 million in 2020 compared to a loss of NGN113 million in 2019.  The company as a result had a Loss Before Tax (LBT) of NGN319 million compared to NGN236 million Profit Before Tax (PBT) of the prior year. The PBT in the previous year was attributable to NGN335 million exchange gain and other income of NGN76 million. Total comprehensive income moved down to –NGN337 million from NGN240 million of the preceding year .

Return on Equity (RoE) of -13.7% and Return on Assets (RoA) of -3.2% represented deterioration over the last one year.  The current ratio and acid test ratio were more or less 1.7 and 1.5 times respectively.  Loans and borrowings jumped to NGN938 million from NGN625 million and they accounted for 38.1% of shareholders' fund. This is worrisome because the company hardly generates profits from its operations.  Both operating profit and net operating cash flow could not cover its debt obligations in the period under review.

Business Risk
The company faces stiff competition from cheap imports which makes earnings vulnerable. In addition, the high cost of sales is harmful to gross profit margin. Exchange rate fluctuations can also wipe out its profits as it imports products and components from abroad. 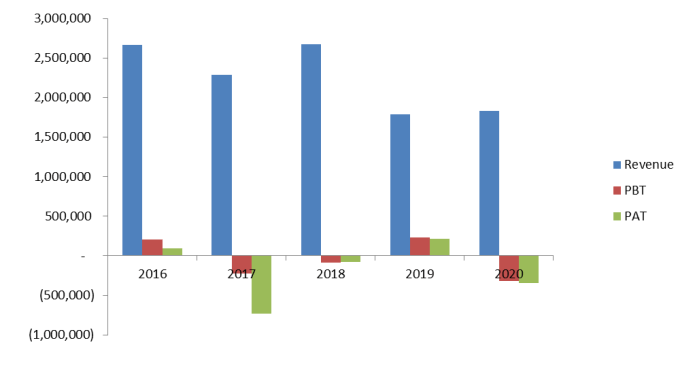 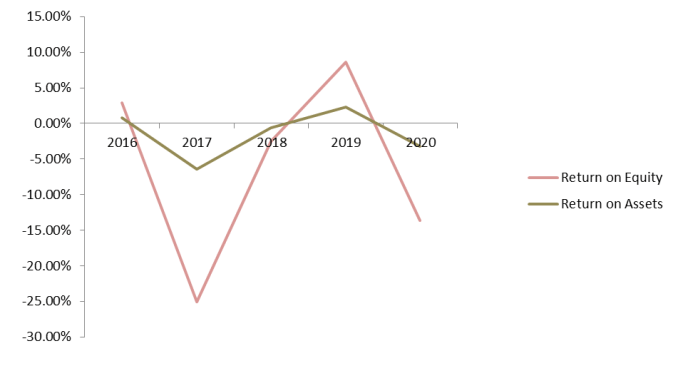