Company Overview
Lafarge Africa Plc (WAPCO), formed on 24th February 1959 produces building materials such as cement, Ready-Mix concrete, and aggregates. Its product portfolio includes Elephant Cement, AshakaCem, Unicem, PowerMax, and Elephant Supaset. Elephant Cement, its flagship product, has been on sale in the Nigerian market for about 60 years. WAPCO  was quoted on the Nigerian Stock Exchange (NSE) in 1979.

Ashaka Cement Limited (ACL) and Wapsila Nigeria Limited (WNL) are wholly-owned subsidiaries of the company.  Readymix  Nigeria Limited (RNL) ceases to be a subsidiary as its operations have been merged with the company’s. WAPCO has a joint venture agreement with Continental Blue Investment for the financing and operation of a cement grinding plant in Ghana. In 2019, It sold Lafarge South Africa Holdings (Pty) Limited to a related company, Caricement BV for US$317 million. The proceed was used to settle the loan it obtained from Caricement BV in 2017.

Investment Thesis
Shareholders’ fund of WAPCO has been impacted negatively by reserves arising from acquisitions. The reserves from business combinations and reorganisation dropped to -NGN254.1 billion from -NGN368.7 billion. The sale of Lafarge South Africa Holdings (Pty) Limited (LSAH) is a welcome development. It has reduced indebtedness and liquidity pressure on the company. In addition, profitability is expected to improve going forward. LSAH had an operating loss and Loss Before Tax (LBT) of NGN13.7 billion and NGN18 billion respectively in 2018. And for the 7 months ended to 31st July 2019, operating loss and LBT were NGN8 billion and NGN8.9 billion in the order given.

The sale of LSAH and rights issues have helped to strengthen the company’s financial position. Earnings Per Share (EPS) has grown by 32.3% on a 3-Year Compound Annual Growth Rate basis despite the rights issues. Operating profit now covers interest on loans. Short-term debt has been reduced to NGN11.5 billion from NGN129.1 billion in a year.  In addition, operating profit can pay off short-term debt 3 times compared to 0.3  of the previous year, 2018. WAPCO generated a free cash flow of NGN57.9 billion (2018: NGN6.1 billion, 2017: -NGN22.4 billion) which translated into NGN3.60 per share (2018: NGN0.7, 2017: -NGN2.6).

Dividend payment resumed as NGN16.1 billion was paid to shareholders for the 2019 financial year (2018: nil). We expect shareholders to enjoy dividends uninterruptedly going forward. WAPCO announced revenue of NGN179.9 billion for quarter 3 of the year 2020; this amounted to a quarter-to-quarter revenue rise of 10.3%. Similarly, operating profit and Profit Before Tax (PBT) added 15.7% and 70.3% respectively quarter-on-quarter. The total equity of NGN357 billion was a gain of 3.5 percentage points in nine months.

WAPCO is a leading manufacturer of cement and related products in Nigeria. It has operations in Ogun, Gombe, Cross Rivers, Lagos, Abuja, and Port-Harcourt. The company stands to benefit from the housing and infrastructural demand by the growing population of the country. We expect investors to buy at a price within our fair value estimate.

Valuation
WAPCO has forward Earnings Per Share (EPS) and Price-to-Earnings ratio of NGN1.75 and 10.3 times respectively. We valued a share of WAPCO at an estimate ranging from NGN17.6 to NGN22.9. A return of 29.1% is anticipated on a share of the company.

Financial Overview
WAPCO declared revenue of NGN213 billion in 2019, 2.2% lesser than the NGN217.8 billion announced in 2018. NGN207.2 billion or 97.3% of total revenue comes from the sale of cement (2018: NGN210.5 billion or 96.7% of total revenue). Gross profit decreased by 16.6% because of the rising cost of sales and revenue decline. The cost to revenue ratio climbed 4.5 percentage points from 69.2% of a year ago. Operating profit at the end of 2019 financial year was NGN34.9 billion, shedding 9.4% year-on-year. Besides, operating profit formed 16.4% of revenue compared to 17.7% of the prior year. WAPCO produced a PBT of NGN17.9 billion in contrast to the LBT of the previous three financial years. Net profit for the year jumped to NGN115.1 billion owing to NGN99.6 billion profit realised from disposing of its interest in Lafarge South Africa Holdings (Pty) Limited.

Though it trails its 11-year average of 14.5%, the PBT margin of 8.4% was better than -0.7% of the preceding year. PAT margin of 7.3% was a 96% improvement on the figure for the previous year. Shareholders’ fund jumped from NGN134.5 billion to NGN344.9 billion due to rights issues and reduction in reserves arising from reorgainsation and business combination. However, total assets decreased from NGN540.7 billion to NGN497.2 billion between 2018 and 2019. EPS of NGN7.2 was better than –NGN1.0 of the year before 2019. Book Value Per Share (BVPS) of NGN21.4 represented an improvement of 38% year-on-year.

Business Risk
Slackening economic activities may affect the sales and profits of WAPCO. High cost weakens the profit margins of the business. 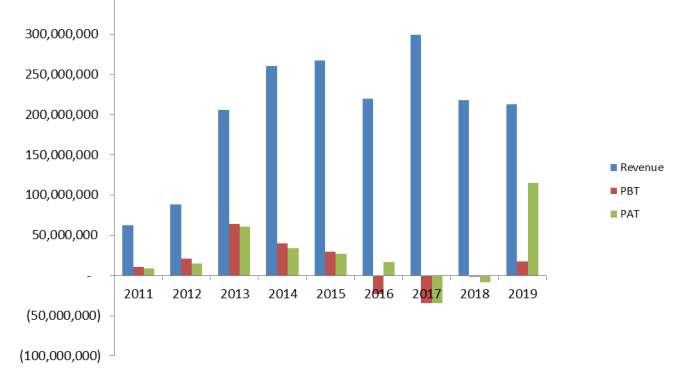 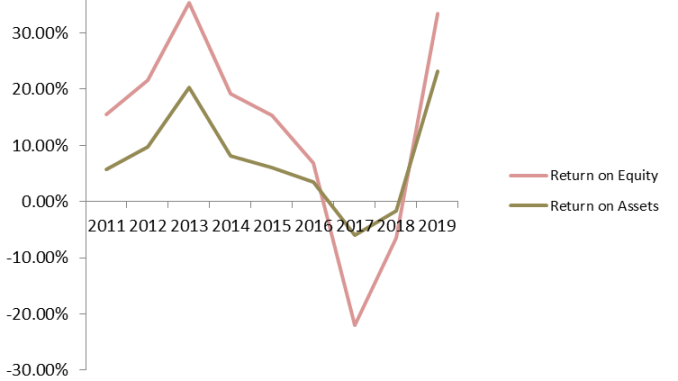