Company Overview
May & Baker Nigeria Plc (MAYBAKER) began as a private limited liability company in 1944. It was turned into a public limited liability company in 1979. Its shares were quoted on the Nigerian Stock Exchange in 1994. MAYBAKER made revenue from two business segments in the year under review namely pharmaceuticals and beverage. The pharmaceutical products are in different categories such as analgesics, anti-diabetics, anti-infectives and anxiolytics. The beverage segment produces Lily table water.

T.Y. Holdings Limited has a 41.8% equity stake in MAYBAKER while Onyishi Maduka Samuel’s shareholding is 14.9%.   Senator Daisy Danjuma replaced Lt. General Theophilus Danjuma (GCON) as chairman of the board of directors in 2019. Mr. Nnamdi Okafor is the company’s managing director. Mr. Okafor was appointed managing director in February 2011. Mr. Patrick Ajah who joined the board on 1st December 2020 will take over the office of the managing director on 1st January 2021.

Investment Thesis
MAYBAKER has a joint venture with the Federal Government of Nigeria, through Biovaccines Nigeria Limited, to produce and distribute vaccines. Biovaccines Nigeria Limited is expected to start contributing to revenue soon. It has also signed an agreement with the Federal Institute of Industrial Research Nigeria (FIIRO) for the production of a nutritional supplement. We applaud the tenacity of management in boosting earnings in an industry riddled with high cost and low-profit margins.

Debt has increased to NGN3.7 billion at the end of Quarter 3 of 2020. Debt is now 26.7% of total assets and 60.5% of total equity. We do not believe MAYBAKER is insolvent. But we recommend better working capital management.

Valuation
MAYBAKER is trading within our valuation ranging from NGN3.10 to NGN4.70 per share. A 21.1% return is expected on an investment in the company’s shares.

Financial Overview
MAYBAKER posted revenue of NGN8.1 billion in 2019 as against NGN8.6 billion achieved in the previous year, 2018. This amounted to a year-on-year decline of 5.5% compared with the 8.6% drop of the prior period. A 5.6% fall in sales revenue from pharmaceuticals from NGN8.5 billion to NGN8 billion was responsible for the decrease in total revenue in the year under review (2019). Beverages brought in revenue of NGN77.2 million which represents about 1% of total revenue made in 2019 (2018: NGN70.4 million or 0.8% of total revenue). Gross profit shed NGN257.7 million or 8.2% in spite of a drop in the cost of sales. The cost of sales to turnover ratio of 64% is just 0.4% lesser than the 9-year average of the company.

MAYBAKER raised NGN1.9 billion from rights issue to shore up the capital of the company. Consequently, shareholders’ fund increased while debt was reduced at the end of the 2019 financial year. Shareholders’ fund jumped by 62.4% to NGN5.9 billion. Debt was NGN482.5 million at the end of 2019, 67.8% down from NGN1.5 billion stated in its books a year ago. MAYBAKER did not have difficulty paying the interest on its loans as both operating profit and operating cash flow adequately covered interest obligations. In 2019, operating profit could pay interest 5.9 times while cash flow from operations could pay it 7 times. However, the debt was short-term in nature and must be liquidated within a year which put pressure on the company.

Business Risk
MAYBAKER is susceptible to exchange rate fluctuations as it engages in importation from other countries. Besides, competition from imported products is a threat to revenue growth.

Earnings Graph
May and Baker Returns 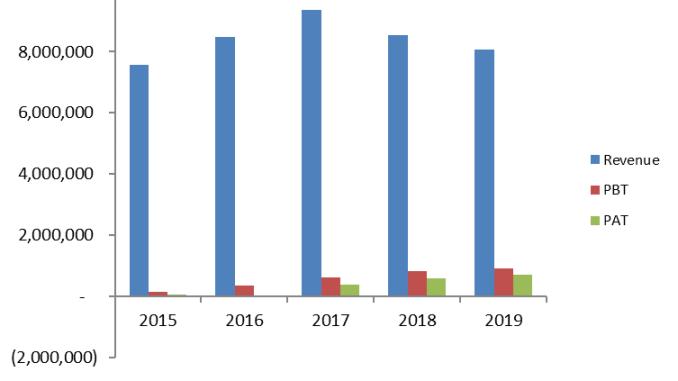 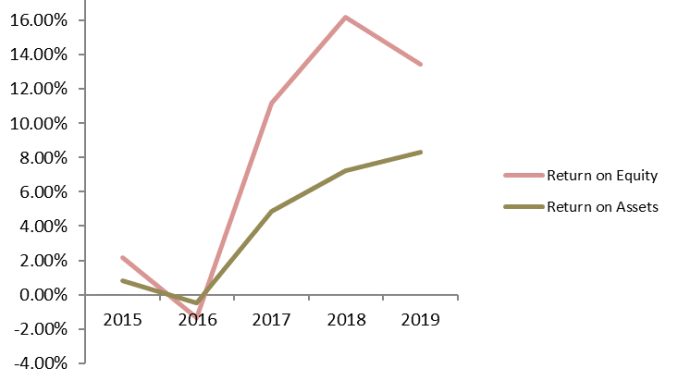