Company Overview
The collaboration between the Federal Government of Nigeria and Atlantic Salt & Chemical Inc. (USA)  led to the establishment of the National Salt Company of Nigeria Plc (NASCON) in April 1973. It was privatised in 1991 and its shares were listed on the Nigerian Stock Exchange in October 1992. This paved way for Dangote Industries Limited to acquire most of the shares of NASCON, thereby becoming its parent company. Thereafter, NASCON acquired all the assets, liabilities and operations of Dangote Salt Limited.

NASCON is primarily engaged in processing raw salt into refined, edible and industrial salt. The company’s name was changed to Nascon Allied Industries Plc in 2014 following the expansion of its product mix. A seasoning plant was inaugurated in 2014 while a tomato paste packaging plant and a vegetable oil refinery commenced operations officially in 2015. Apart from broadening its product portfolio, NASCON has invested in salt refining capacity upgrade. A new salt refinery has been installed to boost the production of salt, its main product.  About 80% of the total revenue of NASCON comes from the sale of salt.

The board of directors of the company is chaired by ‘Yemisi Ayeni. Paul Farrer was named managing director in 2015. Paul has garnered relevant experience of over two decades in Africa.  Fatimah Aliko-Dangote joined the board as an executive director in 2016.

Investment Thesis
NASCON, a member of the Dangote Group of Companies, is the maker of the leading brand Dangote Salt. The products of NASCON include Dan-Q Seasoning, Dangote Seasoning, Dangote Stew Mix Powder and Dangote Curry Powder. Dangote Salt, its core product, is produced in three facilities situated in Apapa (Lagos State), Oregun (Lagos State) and Port Harcourt (Rivers State) in Nigeria. Seasoning is becoming an important source of earnings since it was introduced. Revenue from salt has grown by 4.4% while seasoning sales expanded by 51.7% on a 3-year Compound Annual Growth Rate (CAGR) basis.

However, the difficulty in obtaining foreign currencies for the importation of raw materials has been disrupting the production of tomato paste and vegetable oil. Consequently, NASCON has been losing revenue and profits over the past few years. Sourcing for raw materials locally will reduce costs and assure a regular supply of raw materials.

Total assets have been growing; they have expanded by a 3-Year CAGR of 13.7% in 2020 compared to 16.3% in the prior year. The company has been investing in capital; we expect capital investment to yield fruits soon. In addition, it makes a lot of cash in spite of the continuous spending on capital. Net operating cash flow gained NGN1.9 billion or 31.7 percent year-over-year to NGN8 billion. Shareholders have enjoyed uninterrupted dividend payments for years. Dividend yield hovers around 7.8%. Return on Equity (RoE) and Return on Assets (RoA) are around 33.8% and 16.4% respectively.

Valuation
NASCON trades at 14.2 times year-end earnings, 3 times year-end book value and 1.4 times year-end sales. The value of a share of NASCON ranges from NGN10.40 to NGN13.65. It currently trades close to our fair value estimate.

Financial Overview
NASCON grew revenue by 1.9% to NGN28 billion from NGN27.5 billion in the previous year, 2019.  The company made NGN25.3 billion from the sale of salt, up from NGN18.8 billion posted in the prior year. Seasoning sales declined by NGN187.5 million or 6.6% year-over-year. This meant that 90.5% of sales revenue was attributable to salt sales (2019:68.5%); seasoning generated 9.5% of total sales revenue (2019:10.4%). Tomato paste and vegetable oil did not produce any sales revenue due to the inability to procure foreign exchange for raw materials importation.

The net assets of NGN12.7 billion (2019: NGN11.1 billion) translated into Book Value Per Share of NGN4.80 (2019: NGN4.19). Earnings Per Share had a 45.7% rise to close at NGN1.02 at the end of the 2020 financial year. Total assets which are growing peaked at NGN44.3 billion in 2020. The company generates a lot of cash regularly. Cash of NGN2.6 billion was posted by the company (2019: NGN3.7 billion). Working capital was negative due to a rise in trade payables. Trade and other payables formed the bulk of total liabilities, accounting for 90.5% of current liabilities (2019:83.2%) and 73.1% of total liabilities (2019:56.5%). The current ratio stood at 0.9 compared to 1.1 times of the preceding year. The company repaid a loan of NGN3.3 billion to reduce its debt burden. Therefore, interest on borrowings was reduced by NGN50.9 million. Lease interest, however, rosé by NGN19.1 million to NGN58.7 million. NASCON’s operating profit and cash flow covered its interest obligations many times. Though it was flat at 71.3% in the year 2020, the total liabilities to total assets ratio has been on the increase.

Business Risk
NASCON is exposed to exchange rate fluctuations as it imports raw materials and components from abroad. The scarcity of foreign exchange as a result of regulatory constraints is an impediment to production. Therefore, the company could not make any revenue from tomato paste since 2017, and no revenue was made from vegetable oil in 2018 and 2020. 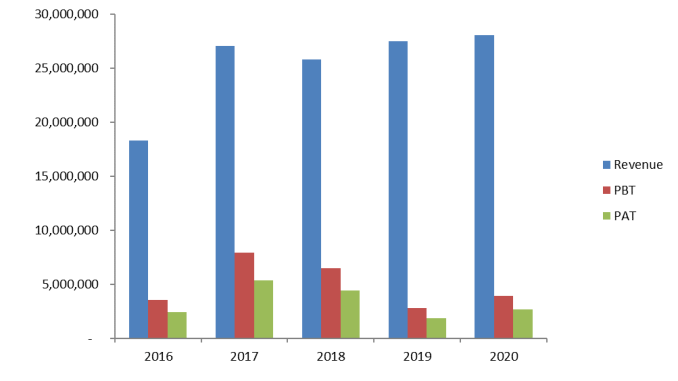 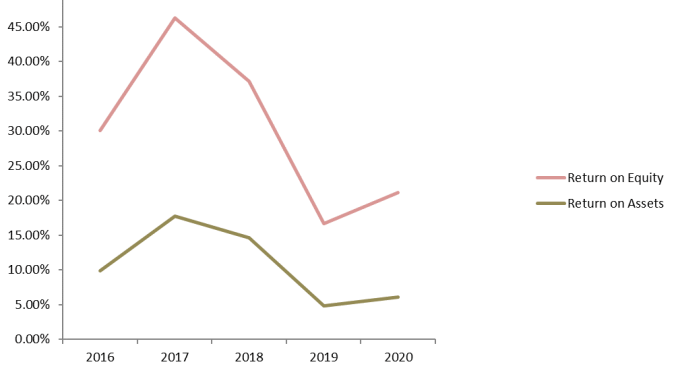