Investment Thesis
The company suspended drilling activities in 2015 against the backdrop of dwindling crude oil prices.  However, the recommencement of drilling activities in 2018 has increased its reserves and afforded it the opportunity to bolster revenue as crude oil prices pick up. Crude oil sales have more than doubled between 2015 and 2018. Crude oil sales jumped to NGN29.4 billion in 2018 from NGN12.5 billion recorded in 2015 translating to  33% compound annual growth rate in the past three years. 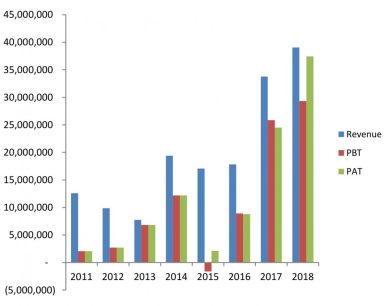 NDEP has been expanding its refinery to increase diesel processing capacity. In addition, it is spending to increase gas processing capacity from 100MMscf/day to 400MMscf/day. Being an integrated oil and gas company, NDEP uses diesel and gas sales to soften the shock caused by unpredictability of crude oil prices. Crude oil accounts for over 70% of total revenue while gas and diesel sales produce less than 30%. Diesel and gas sales have increased at 24.8% and 31.6% respectively on three-year Compound Annual Growth Rate (CAGR) basis.

Capital spending has increased but total debt has diminished by NGN19.5 billion. Consequently, debt ratio reduced to 6.1% from 19.6%. This is attributable to the conversion of the NGN23.1 billion loan (2017:NGN26 billion) from African Capital Alliance to equity.      But this would lead to dilution of shareholding.

Operating profit margin improved from -11.2% in 2015 to 50.1% in 2018. In the same vein, Profit Before Tax (PBT) margin moved from -9.5% to 75.1%. NDEP pays dividends to investors regularly; and the company has, on the average,   produced Return on Equity (RoE) and Return on Assets (RoA) of 22.2% and 11% respectively. We anticipate minimal disruption to operations because of the relative peace in the Niger Delta.

Valuation
NDEP has adjusted Earnings Power Value (EPV) of NGN453.3 per share. Average Earnings Per Share (EPS) and Book Value Per Share (BVPS) were NGN68 and NGN301.8 respectively. We are of the opinion that a share of NDEP is worth between NGN372.1 and NGN412.6. Both shareholdersꞌ fund and total assets grew by 50.5% and 23.6% respectively. Working capital was NGN4 billion, continuing the improvement of 2017. Borrowings reduced by NGN19.5 billion to close the year at NGN12.1 billion. Despite a 9.2% dip, operating profit can still pay off borrowing costs 26.7 times. Also, operating cash flow can cover it 34.3 times. Total debts to shareholdersꞌ fund fell from 29.8% to 7.6% while debt ratio stood at 6.1%. Current assets can meet all current liabilities and long-term solvency is not impaired.

Business Risk
Oil prices swing up and down; therefore, earnings of NDEP are susceptible. Though gas and diesel sales provide some succour, the company cannot arbitrarily increase prices to widen profit margins owing to regulation. The Niger Delta Region of Nigeria is volatile as such; eruption of hostilities could disrupt operations or destroy facilities. 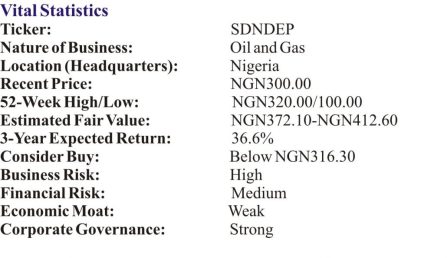