Company Overview
Notore Chemical Industries Limited emerged from the privatisation of the National Fertilizer Company of Nigeria in 2005. The company was converted to a public company in 2014. It is an agro-allied and chemicals company listed on the Nigerian Stock Exchange in 2018.

Notore Chemical Industries [Mauritius] Limited is its parent company with 76.6% of its total shares. Other major shareholders of NOTORE are TY Holding Limited and Africa Finance Corporation which possess 8% and 4.8% equity stake respectively.

Investment Thesis
NOTORE’s location close to the Atlantic Ocean in the oil-rich Port- Harcourt (Rivers State) offers strategic advantages such as access to foreign markets for the acquisition of raw materials and sale of its fertilizers. The company has commenced the overhaul of its plant in order that it can operate at an optimum level without breakdown. This is expected to boost production and sales revenue of the company after it is concluded.

The Federal Government of Nigeria has signed an agreement with domestic and foreign raw material suppliers such as the Kingdom of Morocco to ensure availability at a reduced cost.  This move has spurred some troubled fertilizer blending plants in the country to resume operation and boosted domestic production.  Also, the closure of land borders and the slashing of prices of fertilizer have improved demand. NOTORE is taking advantage of these moves to grow its top-line. However, profitability has yet to improve. It has lost a total of NGN51.3 billion before tax in six years. High finance costs and the cost of sales have made it difficult for the company to make profits. NOTORE plans to raise additional capital of NGN40 billion. This would plunge the company into more debt.

NOTORE is one of the major players in the industry. The teeming population of Nigeria and Sub-Saharan Africa should create an opportunity for the company to strengthen its earnings going forward. Investors should be adequately rewarded in the medium term. Total assets and shareholders’ fund have increased by 8.6% and 18.4% respectively on a 3-Year Compound Annual Growth Rate (CAGR).

NOTORE is, in our opinion,  overpriced at the current market price of NGN62.50 per share. We would closely monitor the company to see how management’s efforts at transforming the business pan out.

Valuation
A share of NOTORE should trade between NGN24.10 and NGN28.10.  We anticipate a return of 47.1% for buying the shares of the company.

Financial Overview
NOTORE posted a 20.2% fall-off in revenue at the end of 2019 financial year compared to a 25.3% drop in 2018 against the backdrop of decreasing domestic sales. Sales revenue from Nigeria dipped  24.4%  compared to 22.2% decline of a year ago.  Export sales were NGNNGN1.2 billion representing 5.8% of total sales. The cost of sales to turnover moved from 64.2% to 81.5%, a leap of 17.3%. Materials cost, a major component of cost of sales,  was 37.6% of revenue (2018: 34.2%). As a result, gross profit diminished by NGN5.6 billion. The escalating cost of sales, coupled with rising administrative expenses, resulted in operating loss of NGN3.1 billion. An operating profit of NGN2.9 billion was made in the foregoing year.

NOTORE lost NGN10.3 billion before tax but made a loss after tax of NGN5.8 billion as a result of NGN4.5 billion income tax credit. The total comprehensive income for the year was NGN24.3 billion because of NGN42.5 billion revaluation surplus on property, plant and equipment. Gross profit margin was 18.5%, shedding 17.3% in a year. The operating profit margin was -14.5%, down from 10.7%. Profit Before Tax (PBT) and Profit After Tax (PAT) margins were -47.9% and -26.9% respectively.

NOTORE is highly indebted and has been bogged down with debt obligations. Operating profits have been wiped out by finance costs over the past six years. The company had a total debt of NGN80 billion as at 30th September 2019 (year-end) comprising NGN26.1billion short-term loan and NGN53.9 billion long-term loan. Quarter 1 result as at 31st December 2019 showed that total debt has reached NGN94.6 billion.

Business Risk
NOTORE will need to raise more capital to expand its capacity in order to meet the growing demand for fertilizers; investing in new fertilizer plant is capital intensive and will increase indebtedness and make NOTORE’s net earnings vulnerable. 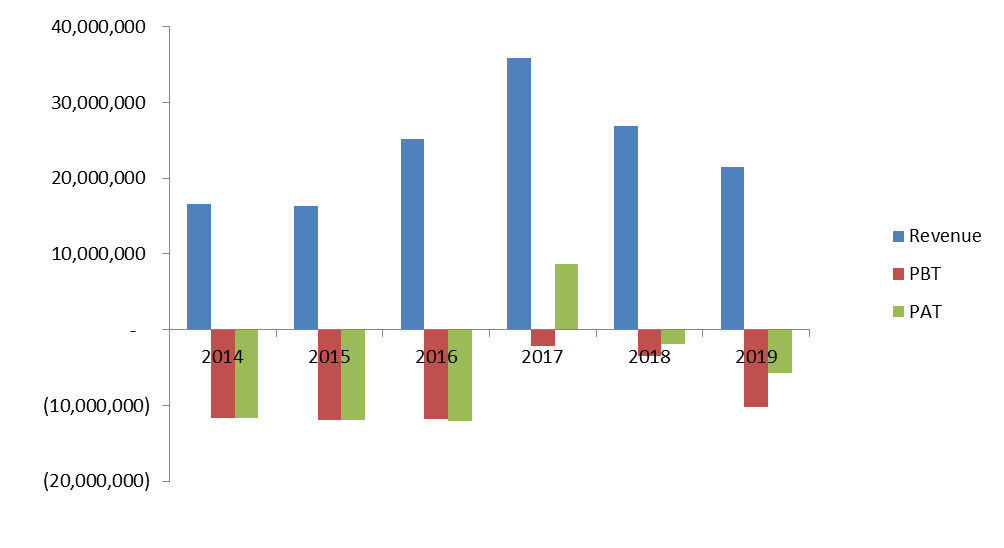