Company Overview
OMOMORBNK, formerly known as Osun Building Society Limited, was established in 1993. The bank was privatised in 2013 and listed on the Alternative Securities market (ASeM) of the Nigerian Stock Exchange in 2014. The government (Osun State government and the local government councils in Osun State combined)  still controls 39.99% of the company.  Morgan Capital Securities Limited is the major shareholder with 38.96% of the outstanding shares while Uni Capital Limited has  21.02% equity stake in the company.

OMOMORBNK grants mortgage loans for commercial and residential properties. It also provides banking services to retail and corporate customers such as accepting deposits and granting loans.

The oversight function of the bank is carried out by a nine-man board of directors which comprises the chairman, managing director and seven non-executive directors. Mr. Adebayo Jimoh chairs the board while Mr. Ayodele Olowookere holds sway as the managing director of the company.

Investment Thesis
Gross earnings gained 26.6% on a 3-Year Compound Annual Growth Rate (CAGR) basis. Interest income, however, has declined by 31.6% over the past three years. Profitability improved in the year under consideration. Operating profit was NGN187.5 million up from NGN78.9 million of the previous year. Gross earnings and operating profit growth were largely driven by investment income which increased from NGN80.6 million to  NGN247.1 million, gaining 206.6% year-on-year. 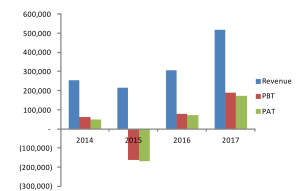 The company enjoys financial support of the Federal Mortgage Bank of Nigeria (FMBN) by procuring loans which it lends to qualified National Housing Fund (NHF) beneficiaries. We expect this to boost the company's capacity to grant more loans as the government embarks on creation of more housing units in the country by injecting more funds into FMBN. OMOMORBNK disbursed NGN142.6 million NHF mortgage loans in 2017 compared to NGN40.1 million of the previous year. This was 14.1% of total loans disbursed (2016: 5.3%).

OMOMORBNK is low-geared; total debt increased by NGN109.7 million and net debts formed only 3.1% of shareholders' fund and  1.9% of total assets. The Nigeria Mortgage Refinancing Company (NMRC) which enjoys USD300 million long-term credit from the World Bank would boost liquidity and lending by refinancing mortgage loan portfolio. Having invested NGN100 million in NMRC, OMOMORBNK stands to benefit through improved liquidity.

The bank is adequately capitalised. Though they expanded by 216.2% year-on-year, deposits are majorly short-term in nature. However, most of its loans are repayable in over a year. Loans to deposits amounted to 82.1% compared to 194% of the year before. Again, customer deposit accounted for over 90% of the total funding; this, if not watched, may exert liquidity pressure on the company.

Valuation
Book Value Per Share (BVPS) averaged NGN0.50. It is trading at 1.2 times average BVPS and 9.3 times average sales per share. OMOMORBNK is worth between NGN0.60 and NGN0.80 per share. Total return on a share of the bank is expected to be 30.5%.

Financial Overview
Gross earnings grew by 70% against the backdrop of a  huge leap in investment income. Gross loans of NGN1.01 billion was tantamount to a 33.8% expansion. However, interest and similar income  dipped 34.5% largely due to a reduction in interest rate. Net interest  shrank to NGN45.7 million from NGN106.5 million owing to a huge rise in interest payment. Interest on fixed deposits accounted for 97.8% of the total interest payments in the year under review.

Both PBT and PAT more than doubled in a year; PBT and PAT closed at NGN187.5 million and NGN173.5 million respectively, gaining NGN108.7 million and NGN102.6 million in that order. Shareholders' fund got better by 7.2% compared to 2.9% of the previous period. Total assets jumped to NGN4.2 billion, gaining 25.8% year on year. 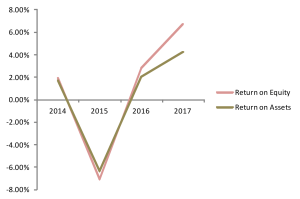 Gross loans have grown by 9.6% over the past three years while deposits have expanded by 84.4%. OMOMORBNK has a debt of NGN117.9 million which is an on-lending facility from the Federal Mortgage Bank of Nigeria. Though debts grew by 116.8%,  it accounts for 4.5% of shareholders' fund.

Business Risk
The default risk impairs asset quality and liquidity. Impairment allowance on loans was NGN148.9 million (14.7% of total loans) compared to NGN205.8 million (27.3%) of the previous period. The bank's ability to attract cheap long-term finance would improve net interest margin going forward.  In addition, extending its services  to other states (apart from Osun State) in Nigeria should help improve its earnings  and spread its risk. 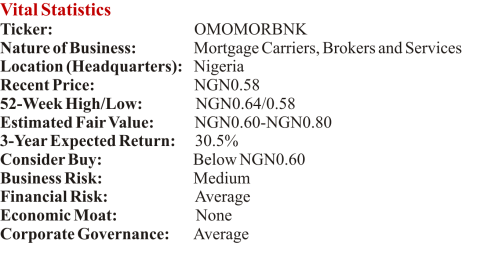