Produce Buying Company Limited went public in 1999 and offered 30.2% of its shares to the members of the public. The present name, PBC Limited, was adopted in 2012.

PBC is domiciled in Ghana and  its shares were listed on the Ghana Stock Exchange in May 2000. It is the only licensed buying company listed on the exchange. It is   licensed to buy cocoa, coffee and sheanuts produced in Ghana on behalf of Ghana Cocoa Board which then make arrangements for their sale and export.

The company is chaired by Charles Bernard Ntim while Kofi Owusu Boateng, the CEO, leads the management team of the company.

Investment Thesis
Despite recording an operating profit of GH¢ 81.9 million, PBC had a Loss Before Tax (LBT) of GH¢16.9 million (2016: GH¢18.1 million). Heavy debt obligation was responsible for the LBT. Debt obligation was 1.7 times operating profit. Similarly, Loss After Tax (LAT) increased from GH¢17.7 million in 2016 to GH¢29.9 million in 2017 representing a 69.3% increase. The company is owing a lot as cocoa purchases are financed largely by debt. Total debt was GH¢543.9 million at 31st March, 2018 and comprised 87.3% short- term loans. The Ghana Cocoa Board grants loans for the purchase of cocoa but this has been inadequate culminating in the accumulation of debts to finance cocoa purchases. In addition, Ghana Cocoa Board granted a loan of US$10 million for the establishment of PBC shea Limited. The company has been having working capital problem. The company intends to recapitalise through equity offering. 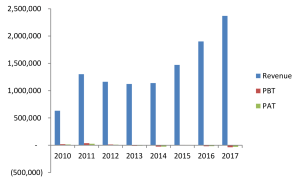 Having completed its retooling, PBC Shea Limited would enhance earnings of the company once it is fully operational. In addition, Golden Bean Hotel has yet to contribute positively to bottom line after three years of operation. Although the hotel produced GH¢10 million revenue in 2017, the hotel had a net loss of GH¢ 2 million compared to GH¢1.7 million of the year before. We are of the opinion that Golden Bean Hotel would benefit from being located in Ashanti, the most populous region in Ghana which boasts of tourist attractions such as Centre for National Culture and Lake Bosomtwe.

We believe the company's shares would offer investors an annual return of 218.1% over the next three years.

Though the company's shares appear to be cheap judging from its fundamentals, we would watch closely management's execution of its plan to recapitalise the business and restore profitability. We, therefore, advise that investors should hold on.

Valuation
We have valued PBC and arrived at a fair value ranging from GH¢0.07 to GH¢1.02 per share. This shows that the company trades below our estimated value. It trades at 0.2 and 0.01 times book value and sales respectively.

Financial Overview
The company is one of the major operators in the cocoa buying business with a market share of 28.9%. It has grown its top line at a Compound Annual Growth Rate (CAGR) of 27.7% over the past three years largely due to increase in the amount of cocoa purchased. Sale of cocoa made up 98.2% of revenue and 95.7% of gross profit earned by PBC. 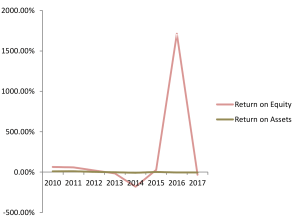 Our analysis shows that PBC's cost of sales increased by 27.6% in 2017 compared to 18.7% of 2016 (on a three-year CAGR basis). On the contrary, cost of sales to revenue ratio has been more or less flat at 90%. High cost of sales impact profit margins negatively.

Operating profit has grown at a 3-Year CAGR of 45.6%. However, the company recorded a Loss Before Tax of GH16.9 million compared to a Loss Before Tax of GH18.1 million of the prior year. Loss After Tax was GH29.9 million from GH17.7 million loss. Profit margins are low. Operating profit margin of 3.5%  was less than its eight-year historical average of 3.9%. Both Profit Before Tax (PBT) and Profit After Tax (PAT) margins were negative owing to the losses incurred by the company.

PBC has been finding it difficult to meet its debt obligations both from its operating profits or operating cash flow. Consequently, dividend payment has been erratic.  However, shareholders' fund leapt 86.9% over the past three years.

Business Risk
We are of the opinion that the company has a high financial risk because of its indebtedness. And its high financial costs put pressure on net earnings and net profit margin. Produce price is regulated by the government through the Ghana Cocoa Board, thereby maintaining a fixed margin that licensed buying companies can operate within.

There is relatively low brand loyalty in the industry. On the whole, there is little protection from competition to the companies operating in the industry. Sale of commodities accounts for the lion's share of revenue; national cocoa purchases have grown by 4.7% in the last ten years. Commodity prices are volatile and growth of its hospitality business can soften the effect on earnings. At present, it is responsible for less than 1% of revenue and 1.5% of gross profit. 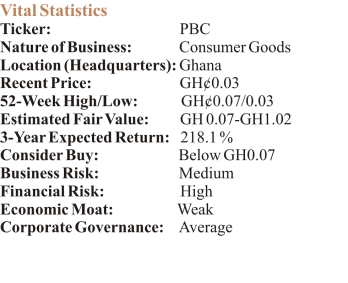