Company Overview
Portland Paints and Products Nigeria Plc (PORTPAINT) was incorporated in Nigeria on 3rd September 1985. Before then it was run as a division of West Africa Portland Cement (now Lafarge Africa Plc). It went public in April 2008 and subsequently got its shares quoted on the Nigerian Stock Exchange. The acquisition of controlling shareholding in 2013 made PORTPAINT  a subsidiary of UAC of Nigeria Plc (UACN).

Investment Thesis
Gross and net earnings have not been growing steadily. This is not unconnected to the macroeconomic variables of the environment in which the organisation is domiciled. High operating costs have made PORTPAINT to produce meagre operating profits over the years. Total expenses averaged 97.4% over the past eight years while operating profit hovered around 1.5%.

PORTPAINT’s main business is the production and marketing of paints. Revenue has grown at a compound rate of 12.3% in 2019 compared to 9.3% in the prior year. Besides, net profit has increased by 114.6% over the past three years. Decorative and marine paints accounted for 68.5% and 30.9% of revenue respectively in the year under review (2019). Revenue from the sale of marine paints leaped by 28.5% and gross profit jumped by 25.2% over the past three years. Revenue from decorative paints rose by 7.3% while its gross profit increased by 8.1% on a 3-year Compound Annual Growth Rate (CAGR) basis. In addition to the sale of paints, PORTPAINT renders painting services and sells sanitary wares. Revenue from painting services jumped by 149.3% to NGN58.7 million from NGN23.5 million of the previous year. The sale of sanitary ware products has been on the decline and the business segment had a gross loss in 2018 and 2019.

PORTPAINT is not bogged down by debts. It has also continued to invest in capital. An addition of NGN54.9 million was made to property, plant and machinery in 2019 (2018: NGN85 million). We expect capital investment to yield fruits going forward.

Shareholders have not been adequately compensated for investing in the company. Profits and profit margins of the company have not been encouraging.  We, however, expect management’s cost control measures to come to fruition. Investors should receive regular dividends and better returns on investment in the medium term. PORTPAINT seems to be fairly priced as it is currently trading close to our fair value estimate. We maintain a hold on the company’s shares and would keep close tabs on the company.

Valuation
We have valued PORTPAINT using our valuation models. A share of the company is worth between NGN1.70 and NGN2.60. A return of 12.9% is expected on a share of PORTPAINT.

Total assets were more or less flat at NGN2.3 billion; total equity gained 2.9% from NGN1.5 billion to NGN1.6 billion. The company has no short-term and long-term borrowings. Its operating profit covered the interest on lease liability 35.6 times (2018: 23.7 times). The current ratio and acid test ratios were 2.6 and 1.3 times. Therefore, PORTPAINT’s solvency has not been impaired.

Business Risk
PORTPAINT operates in a fragmented industry and does not have an economic moat to ward off competitors from eating away its earnings. Profitability is endangered by high operating costs; operating costs have exceeded 90% of turnover in the past eight financial years. 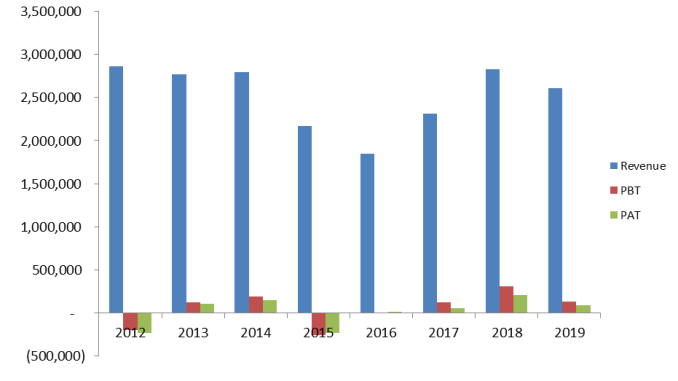 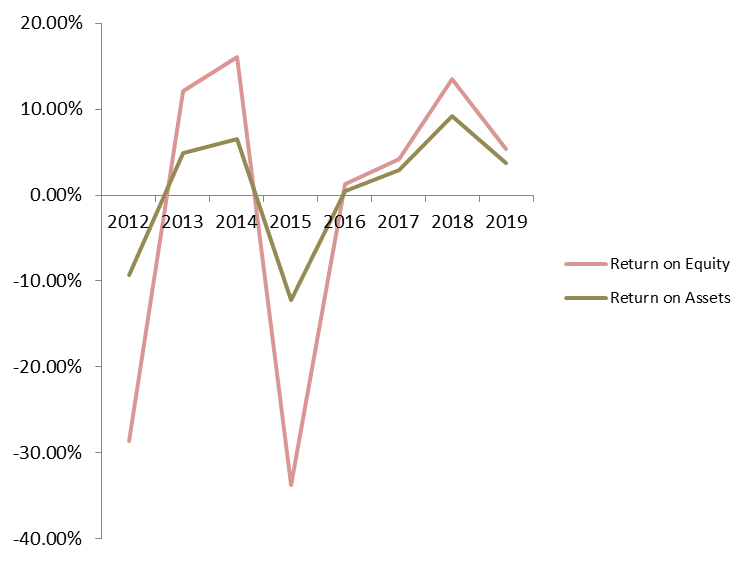