Trans Global Holdings Limited (TGHL) increased its equity stake by acquiring additional 31% shareholding in 2012 through Clover Global Resources Limited. Therefore, TGHL is the ultimate holding company of PREMPAINTS by virtue of its 51% shareholding.

The oversight function of PREMPAINTS is carried out by an eight-man board of directors. Chief Ogooluwa Bankole, the chairman, possesses 13% of the total outstanding shares of PREMPAINTS. Dr. Mufutau Adeoye Yusuf, the managing director, heads the management team of the company.

Investment Thesis
PREMPAINTS’ performance has been subpar and it is lagging behind the competition. The company’s woes have been exacerbated by the current economic impasse. Gross profit margin dropped 2.5% to 22.1%, the lowest in the last eight years.  Costly operations, to a large extent, have made PREMPAINTS unprofitable. Total expenses, on average, have surpassed revenue by 11.2%. Both Profit Before Tax (PBT) and Profit After Tax (PAT) have been negative in the past eight financial years, except in 2014 when PBT and PAT were NGN11.7 million and NGN8.1 million respectively.

PREMPAINTS has not been able to grow its operating assets due to low investment in capital. Net assets totalled  -NGN147.3 million in 2019 compared to 2018’s –NGN130.7 million. Total debt has grown by a 3-Year Compound Annual Growth Rate (CAGR) of 16.3% in 2019 compared to 19.3% of the preceding year. The dearth of profits has made meeting debt obligations a herculean task. This has plunged the company into further debt.

PREMPAINTS’ fortune has not improved judging by the recently released financial statement for the 3rd quarter of the year 2020.  Revenue for the first 9 months slumped. Revenue was NGN70.9 million compared to NGN104.6 million of the corresponding period of the preceding year. Operating loss was NGN23.1 million while PAT was –NGN23.4 million. The company has yet to offset the short-loan of NGN182.1 million which has been in its books since 31st   December 2019.

We would like to see how the management intends to turnaround PREMPAINTS. We will continue to monitor the company. In the light of the worsening fundamentals, we maintain a sell recommendation.

Valuation
We valued a share of PREMPAINTS between NGN0.50 and NGN1.00. The shares of the company are presently trading at a heavy premium to our fair value estimate. A return of -46.1% should be generated on the company’s shares.

Financial Overview
Turnover of NGN131.7 million in 2019 was equivalent to a 20% contraction year-on-year. A 13.6% drop in revenue was recorded in the previous financial year. Gross profit in the current period shrank 28% to NGN29.2 million from NGN40.5 million announced for the end of the earlier period. PREMPAINTS has been finding it hard to make operating profits in spite of declaring gross profits. Operating costs have been exceeding revenue, thereby leading to operating losses. The operating loss for the 2019 financial year was NGN30 million compared to the previous year’s operating loss of NGN35.6 million. Loss Before Tax was NGN29.7 million, down from a loss of NGN72.2 million declared in the prior year. An income tax credit of NGN13.2 million reduced the Loss After Tax to NGN16.5 million; Loss After Tax for the earlier period was NGN69.1 million.

Gross profit margin decreased from 24.6% to 22.1% while PBT and PAT margins were -22.6% and -12.6% respectively. The operating profit margin of -22.8% was worse than the average of -11.2%. Both Return on Equity and Return on Assets have been negative in the past few years. Earnings Per Share for the period under review was –N0.10 and Book Value Per Share was –NGN1.20.

Total assets diminished at a Compound Annual Rate of 9.3% (2018: 8.4% decline). Accumulated losses which have eroded shareholders’ fund, stood at NGN408.1 million, rising by a 4.2% rise in a year. Total equity was –NGN147.3 million in 2019 (2018: -NGN130.7 million). Current liabilities have been in excess of current assets due to poor working capital management. Both the acid test and current ratios have deteriorated. The outstanding short-term loan was NGN182.1 million on 31st December 2019 and the company has not generated enough profit and cash flow to pay up. In addition, PREMPAINTS appears to find it difficult to settle its maturing obligations. The company may be heading towards illiquidity and insolvency.

Business Risk
Dwindling revenue of the government may hamper infrastructural and housing development. This, coupled with the eroding purchasing power of the consumers, would reduce sales volume and the capacity to raise prices of paint products. Consequently, earnings and profit margins are vulnerable to volatility.

PREMPAINTS has weak competitive strength in the industry. Besides, the inability of management to rein in costs cast doubt on the viability and continued operation of the company. 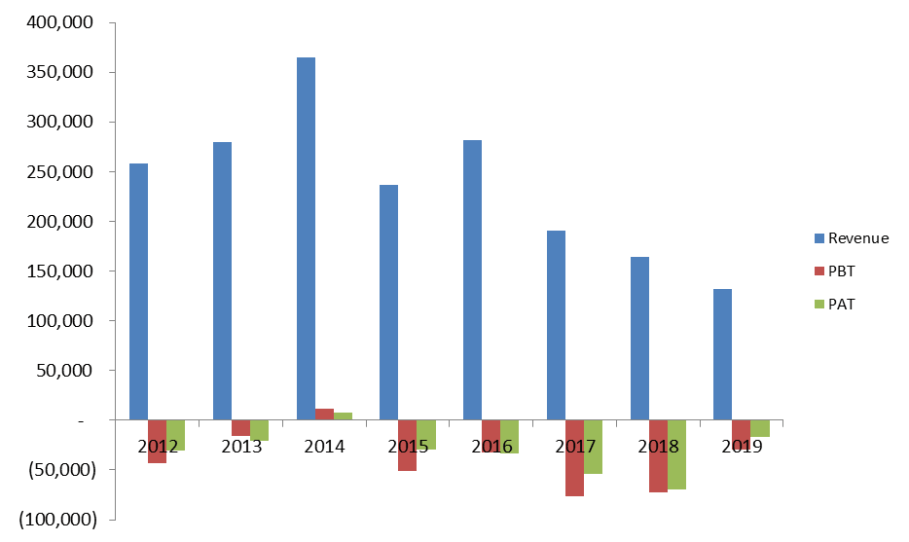 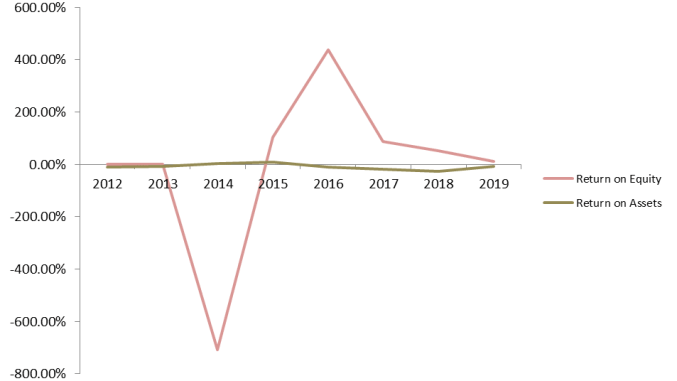