Company Overview
PZ is one of the foremost producers of home appliances and consumer products in Nigeria, with leading brands such as Joy soap, Premier soap, Imperial Leather, Robb, Elephant detergent, Canoe soap and Haier Thermocool. Though it started as a trading company in 1899, PZ commenced manufacturing business as P.B. Nicholas and Company Limited in 1948; it became a public company in 1972. The name, Paterson Zochonis Industries Limited was adopted in1976. And in 1990, it became Paterson Zochonis Industries Plc. On 21 September 2006, the Company chose its present name of PZ Cussons Nigeria Plc.

Though it exports some of its products, PZ derives over 90% of its revenue from Nigeria. Branded consumer goods have higher turnover (over 60% of revenue) but lower operating profit margin and include soap, detergents, cosmetics, pharmaceuticals and confectionery. On the contrary, durable electrical appliances such as refrigerators, freezers and air-conditioners have lower turnover but higher operating profit margin.

PZ prides itself on world-class distribution network while leveraging  on the research capabilities of the PZ group on product innovation.  PZ Cussons (Holdings) Limited (UK), its parent company, possesses 73.3% of the shares of PZ.

Organic and inorganic expansion is at the core of its strategies.   The company has broadened its product portfolio through acquisitions, joint venture agreement and product innovation. Nutricima Limited, producer of edible oil and dairy products, was fully acquired in March, 2015. It has a controlling interest in HPZ Limited, a company domiciled in Nigeria, which produces electrical appliances.

Investment Thesis
PZ is the largest subsidiary of PZ Cussons Group UK.  Gross earnings have grown by 2.9% in the past seven years while operating profit has grown by less than 1 percentage point. Cost of sales to turnover averaged 72.3%. This has adversely impacted its profit margins. Operating profit margin averaged 9.4% while both PBT and PAT margins averaged 7% and 4.9% respectively.

We are of the opinion that competitive pressure from cheap imported goods has taken its toll on revenue growth. Revenue from branded consumer goods has grown by 2.3% (3.4%) on a Six-Year CAGR basis while revenue from durable electrical appliances has grown by 0.7% (1.8%). But we are of the opinion that the fundamentals have not been impaired. PZ generates a lot of cash; it has NGN14.3 billion cash which translates to NGN3.6 per share in the year under consideration. The company is not overburdened by debt obligations. In addition, PZ consistently pays dividends to its shareholders. 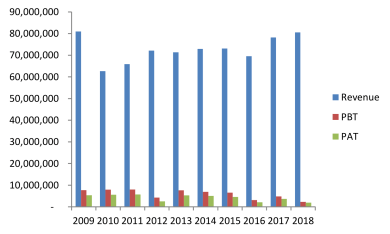 A share in PZ should produce a return of 36.4% over the next three years.

Using our Discounted Cash Flow (DCF) Model, a share of PZ is worth between NGN14.00 and NGN17.4. Our Dividend Discount Model produced a value ranging from NGN9.00 to NGN12.80 per share. 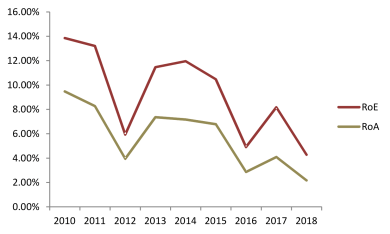 PZ has generated a positive free cash flow of NGN8.7 billion (2017:-NGN2 billion). It is not illiquid and its long-term solvency is not under threat.

We are of the opinion that earnings can be improved if efforts are made to penetrate markets outside Nigeria. 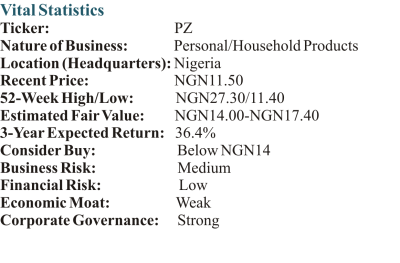