Company Overview
SEPLAT is an oil and gas exploration and production company listed on the Nigerian Stock Exchange and London Stock Exchange in April 2014. The company which was established in June 2009 commenced operations in August 2010.

Investment Thesis
With interest in six oil blocks in the Niger Delta region of Nigeria, SEPLAT boasts of large stock of drilling opportunities. The licences for three major oil blocks have been renewed to expire in October 2038. These blocks (OMLs 4, 38 and 41) were responsible for 100% of gas production and 92% of oil production. 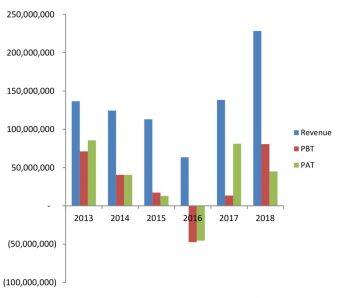 The oil segment produces the bulk of revenue (2018:79.1%, 2017:81%). However, the gas business offers SEPLAT the opportunity to broaden its revenue sources considering the unpredictability of crude oil prices. Consequently, the company has made a huge investment in gas capacity upgrade in order to cushion oil price volatility. A substantial part of the NGN26.2 billion investment in gas and oil properties in the year under review is in gas production and processing capacity (2017:NGN9.8 billion). We think that this is a step in the right direction because it positions the company to take advantage of opportunities in the natural gas business in Nigeria. Crude oil produced 79.1% of total revenue while 81.2% of Profit After Tax (PAT) come from the gas business. Besides,the gas business has a better operating profit margin and returns than the oil business. Though the operating profit margin for oil increased from 10.7% to 32.3%, it trailed the operating profit margin of 76.5% produced by the gas business.  Return on Equity (RoE) for crude oil closed at 2.1% compared to 14% recorded in 2017. In contrast, the gas business produced RoE of 28.9% in the year under consideration (2017:32.4%). Return on Assets (RoA) for oil was 1.2% compared to 23.9% for gas.

Valuation
Book Value Per Share increased to NGN864.5 from NGN815.8. Forward Price Earnings Multiple (P/E) is 7.5 times. Our Dividend Discount Model (DDM) produced a   value ranging from NGN705.1 to NGN763.1 per share while our Discounted Cash Flow Model (DCF) estimated a share of SEPLAT to worth between NGN731.9 and NGN794.5. 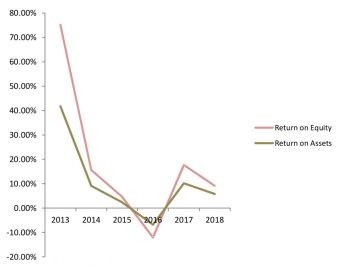 Business Risk
Crude oil price fluctuates in response to changing market forces and this makes earnings vulnerable. Restiveness in the Niger Delta where SEPLAT is located may disrupt operations. In addition, oil and gas industry is highly regulated which implies that it is subject to the dictates of the government. 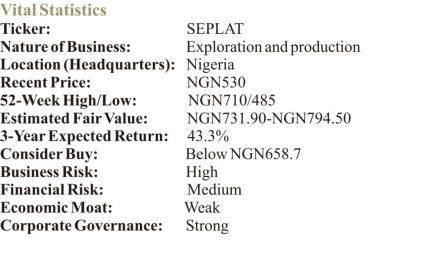