Investment Thesis
The effort of management at strengthening the retail segment is commendable. This segment provides cheaper source of finance. Besides, it would increase net interest income and profitability going forward. Retail banking accounted for 52.6% of net interest income while corporate banking produced 47.6%. Also, the contribution of retail banking to Profit Before Tax (PBT) was 47% compared to 40.6% for corporate banking. Retail deposits have grown by 30% on a 3-year Compound Annual Growth Rate (CAGR) basis while corporate deposits increased by 4.7% on a 3-year CAGR. The bank has been growing its loan portfolio. Gross loans climbed to GH¢2 billion from GH¢1.6 billion of the previous year. But 14.8% of gross loans were non-performing in 2018 compared to 13.3% of the previous year.

The bank’s fundamentals have not deteriorated.  Gross revenue has been growing at a compound rate of 13.8% over the past three years. Shareholders’ wealth added 35.3% compared to 56% of the year before. The rise in shareholdersꞌ fund in the year was due to the recapitalisation mandated by the Bank of Ghana. SOGEGH increased its capital to GH¢404.2 million, a little above the required GH¢400 million. The bank is adequately capitalised and looks poised to benefit from the increased public confidence in the banking sector.

SOGEGH has a trailing Price/Earnings ratio (P/E) of 8 times and a three-year expected return of 77.1%.

Valuation
We valued SOGEGH using Discounted Cash Flow (DCF) Model and Two-Stage Dividend Discount Model (2-Stage DDM). Our DCF model produced a value ranging from GH¢1.6 to GH¢2.6 for a share of the bank. A value between GH¢0.8 and GH¢1.0 per share was estimated from our 2-Stage DDM. 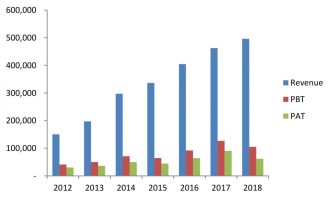 Financial Overview
Gross earnings more than tripled between 2012 and 2018. Interest income was GH¢353.8 million at 31 December 2018, up from GH¢321.8 million of the year before. This is equivalent to 9.9% gain compared to 23.9% of the previous period. Net income interest grew by 6.2% to close at GH¢277.8 million. Net interest income averaged 51.9% of gross revenue over the past six years. Net fee and commission realised by the bank lost GH¢6.1 million or 10.3% in the year under consideration.

Net interest margin lost 60 basis points to close at 56%. PBT margin of 21.2% worsened by 6.3%; PAT margin went down to 12.5% from 19.6%. Both Return on Average Equity (RoAE) and Return on Average Assets (RoAA) are 10.2% and 2% in the order given. Shareholders’ fund expanded by 35.3% in in a year due largely to recapitalisation. Debt amounts to 49.8% of shareholders’ fund compared to 20.1% of the prior period. Operating profit can cover interest on loans.  SOGEGH is liquid and its long-term solvency is not in doubt. 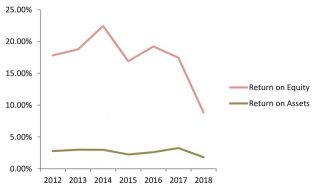 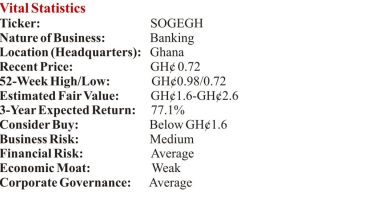