Company Overview
NAL Bank Plc was incorporated as Nigeria Acceptances Limited on November 25, 1960. In 1969, it became the first Nigerian bank to be licensed as a merchant bank. It metamorphosed into a public company in 1992 and embraced universal banking in 2001.

Sterling Bank Plc, a national commercial bank, emerged from the combination of NAL Bank Plc with Indo-Nigerian Bank Limited, Magnum Trust Bank Plc, NBM Bank Limited and Trust Bank of Africa Limited in the wake of the recapitalisation in the banking sector initiated by the Central Bank of Nigeria in 2004.

Mr. Yemi Adeola remains the Chief Executive Officer (CEO) while Mr. Asue Ighodalo leads the board in carrying out its oversight functions.

Investment Thesis
The high margin retail business has diminished in prominence. It contributed 33.8% to net interest income as opposed to 75.1% of 2014. STERLNBANK has taken up Islamic (non-interest) banking. Though Islamic banking contributes less than 1% of net interest income, STERLNBANK could avail itself of the opportunity afforded by this market niche to propel earnings to new heights. Net interest income from Islamic banking jumped by 334.9%.Net fee and commission leapt 81.8%. The bank is increasing its investment in this market niche. However, Islamic banking products are relatively new in Nigeria and require some capabilities to minimise risk as the bank only depends on profit made not interest. Also, the prevailing high interest rate which is a bane of the Nigerian economy may make Islamic banking attractive.

In addition, the bank is cautiously growing its loan portfolio which appreciated by 14.5% (on a 3-Year CAGR basis). And gross loans to deposit ratio peaked at 60%. Deposits have been enlarged by 8.4% and the bank has not created a lot of bad loans. It has been lowering interest rate on loans to attract borrowers in order to boost earnings. Also, interest rate on deposits is increasing to woo savers. This is in response to competitive pressure in the industry. But this may affect net interest margin and profitability unless it grants more good loans and source for cheaper source of finance.

Asset quality and profitability of STERLNBANK are not impaired. STERLNBANK is not insolvent. However, management should watch its short-term liquidity position in order not to run into some choppy waters. And cheaper deposits mobilisation is necessary to stay afloat.

Its recent result shows that the weakened naira led to a total comprehensive loss of NGN8.8 billion in the half year (2015:5.4 billion comprehensive profit).

Valuation
Our fair value estimate for STERLNBANK of between NGN4.3 and NGN6.5 is above its current market price of NGN1.05. Therefore, we recommend a buy.

Financial Overview
Interest income expanded by 3.8% compared to 11.4% of the preceding year. This was largely due to a 69.1% decline witnessed in the retail segment of the business. It was a sharp contrast to the penultimate year when retail banking nudged up 30.1% of total interest income (2013:70.2%). In the same vein, the retail business adversely affected the net interest income, the bank’s core income; net interest was NGN39.5 billion down from NGN43 billion, representing an 8.1% fall. The slump in retail banking business is not unconnected to the slack period in the economy and the resultant scantiness of credit-worthy retail customers.

PBT reduced by 12.9% while PAT rose 5.5%. Net interest margin worsened by 5.6% to close at 35.9%. PBT margin was more or less flat at 10% while PAT margin gained only 65 basis points. The bank was able make higher interest from its loans in the year, though the rate has been diminishing in recent years. In addition, it sourced for funds at a much higher cost than in the previous period. The bank was able to attract deposit at higher cost in the year. The average interest rate on deposits was 6.4% while average interest rate on loans was 18.6%.

Non-performing loans ratio of 4.3% is higher than the 4-year average of 2.9%. The bank’s provision for bad loans increased by 2% to close at 4.4%. But this may be too low in the light of current realities. More loans are been given to customers with caution. And this has had a positive effect on earnings.

Interest income for the half year to June 30, 2016 got better by 4.3% compared to the corresponding period of the previous year. However, net interest income jumped 31.9% due cheaper deposits. PBT was adversely affected by the depreciated naira; it shed 27.7%. Deposits have only grown by 6.3% year to date while loans to customers swelled by 33.9%.

Business Risk
STERLNBANKhas a narrow economic moat and faces stiff competition. It faces increased risk occasioned by the depreciated naira since the bank sources for loans from foreign entities.

We are of the opinion that the current economic quagmire will impact on the quality of its loan portfolio going forward. 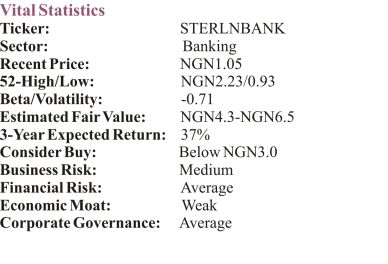