Company Overview
The fund is a close-ended Real Estate Investment Trust (REIT) that was founded on 9th August 2008 and began operation on 3rd February 2009. It was listed on the Nigerian Stock Exchange on 2nd July 2010. United Capital Trustees Limited (formerly UBA Trustees Limited) oversees the operations of the fund and ensures it is managed in accordance with the trust deed. The fund is managed by SFS Capital Nigeria Limited. Dr. Layi Fatona is the chairman of the fund manager while Mr. Patrick Ilodianya heads its management team.

Investment Thesis
Rents and interests from money market instruments produce, on average, 94.8% of gross earnings of the fund. Rental income increased in 2019 due to an increased occupancy rate. Although there was a 44.8% surge in rental income in the year, it only translated into a 1.5% increase on a 3-Year Compound Annual Growth Rate (CAGR). Interest income, by contrast, decreased by 12.5% over the past three years.

Properties generate most of the gross earnings of UHOMREIT; the ability to develop more properties or increase rent has an impact on earnings. Properties and FGN Sukuk, which are grouped as investment properties by the fund, totalled NGN9.9 billion at the end of the 2019 financial year. Though they expanded by 2.9% in the year under consideration, investment properties have shrunk at a compound rate of 3.8% over the past three years.

UHOMREIT invested NGN500 million in FGN Sukuk, an Islamic compliant bond, which provides a steady flow of income to the fund.  Investors have enjoyed uninterrupted dividend payments in the last three years. The fund distributed 93.9% of its net income to unitholders in 2019. In addition, UHOMREIT is appealing to investors because the average occupancy rate of its properties is high and the rent default rate is low. Operating expenses to gross income ratio of 33.8% lags behind the 10-year average operating expenses to the gross income of 36.6%. Profit margins are high on account of low operating expenses to turnover ratio. Net income before tax margin was 66.2% (2018:68.4%) while net income after tax margin was 63.4% (2018:64.8%).

UHOMREIT currently trades at a heavy premium to our estimated fundamental value. We expect Return on Equity (RoE) and Return on Assets (RoA) of 3.4% and 3.2% respectively.

Financial Overview
Gross income declined by 1.6% despite a 44.8% increase in rental income in 2019. Interest income has decreased for two consecutive years while rental income increased for the second year in succession. Interest income decreased from NGN225.6 million in 2018 to NGN160.7 million in 2019. Rental income increased by NGN118 million (44.8%) year-on-year compared to NGN59.5 million (29.2%) rise in the previous financial period. A rise in operating expenses was responsible for a drop in net income and profit margins. Operating expenses swelled by 5.3% while operating expenses to gross income ratio was 33.8%, up from 31.6% of the prior year.  Net income before tax lost NGN18.1 million which amounted to a 4.7% fall in a year. Likewise, net income after tax shed 3.6% to close at NGN350.6 million at 31st December 2019 (the year-end). Earnings Before Interest, Taxes, Depreciation, and Amortisation (EBITDA) dipped 3.8% to NGN383.5 million.

Total assets stood at NGN11 billion, growing by less than 1% in the year under review. Investment properties added 2.9% to reach a value of NGN9.9 billion. Investment properties formed 89.9% of total assets and exceeded the preceding year’s figure of 87.9% by two percentage points. Total equity was NGN9.8 billion and net asset value per unit was NGN52.2 in the year under consideration. The fund is not indebted and, therefore, has no debt obligations.

Business Risk
Though the rent default rate is low, we expect this to increase in the light of the harsh economic realities in the country. Again, an increase in the vacancy rate would hamper the ability to increase rent and, consequently rental income. 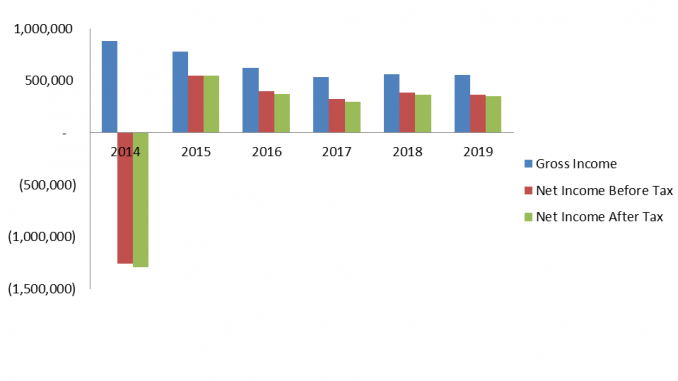 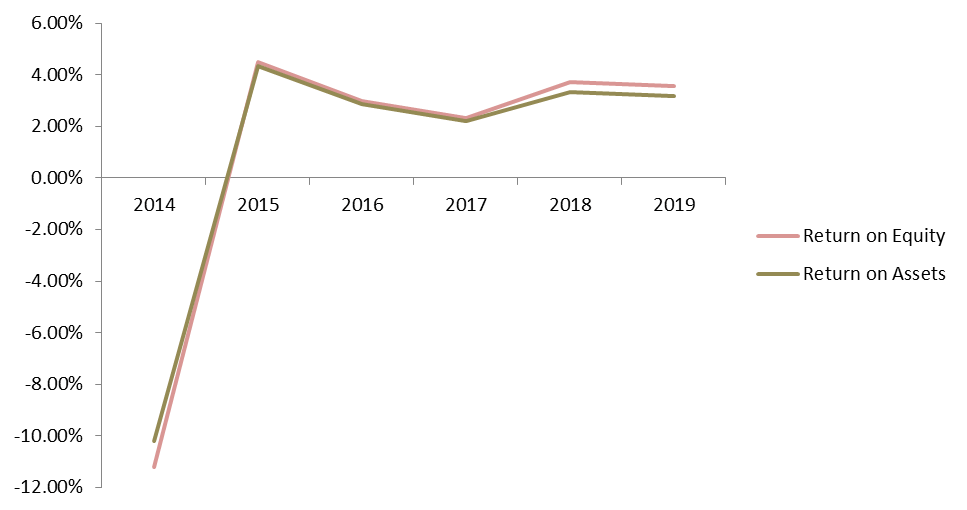