Management has been growing the business by branching out into the production of allied products through its domestic and foreign subsidiaries. This has helped the company to broaden its product portfolio and achieve operational efficiency and profitability. Vitaparts Nigeria Limited began operation on October 1, 2016 and manufactures motor vehicle oil filters.

Dr. Bamidele Makanjuola is the chairman of the board of directors while Mr. Taiwo Adeniyi is the group managing Director. Prof. (Mrs.) Rosemary Egonmwan, Mr. Mohammed Goni Alkali and Mr. Parreira Sliva joined the board on October 1, 2017. Both Mr. Olatunji Anjorin and Engr. (Mrs) Florence Seriki resigned from the board in the year under review.

Investment Thesis
Revenue has grown annually at a Compound Annual Growth Rate (CAGR) of 1.9% over the past three years. Nigeria produced a revenue increase of 2% (on a three-year CAGR basis) while operations outside Nigeria lost 37.9% on a three-year CAGR basis. Revenue from Foam, its flagship product, was NGN15.4 billion up from NGN11.7 billion, gaining 31.7%.

VITAFOAM took over Vono Products Plc, a prime maker of furniture products, on 31 March 2016.  Consequently, the assets of Vono Products were transferred to Vono Furniture Products Limited which started operation on April 1, 2016. This acquisition is expected to help consolidate its market position and drive down its cost. VITAFOAM has a robust distribution network and its investment in other African countries is expected to spur growth and bear upon profitability. The African operations produced 0.1% of total revenue which was worse than 2.6% of a year earlier. Despite being responsible for about 86% of total revenue, foam products produced 33.3% of operating profit in 2017 as against 65.4% of the year before. The contribution of furniture and other products to operating profit for 2017 improved by 32.1% on that of 2016. 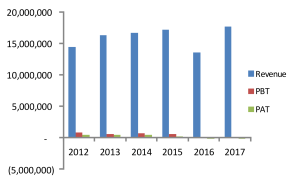 Debts are mounting and the interest payment has had a negative impact on net earnings and profit margin. Profit Before Tax (PBT) margin, which has been on the decline, was less than 1 percentage point. Profit After Tax (PAT) margin was -0.7%. Moreover, VITAFOAM obtained a NGN2 billion loan in September, 2017 to shore up its working capital.

VITAFOAM's shares should offer investors an expected return of 30.1% consisting of capital appreciation of 23.7% and a dividend yield of 6.4%.

Valuation
Our Discounted Cash Flow (DCF) Model generated a fair value between NGN2.5 and NGN4 for a share of the company. Our 2-Stage Dividend Discount Model (DDM) put a share in the company at a value ranging from NGN2.04 and NGN3.8. Currently, a share of VITAFOAM trades at NGN3.04 which is within our fair value estimate.

Financial Overview
In 2017, VITAFOAM grew its revenue and operating profit by 30.4% and 74.1% respectively. Revenue growth was largely due to 33.7% rise in revenue from Nigeria. However, revenue from its African subsidiaries (Vitafoam Sierra Leone Limited and Vitafoam Ghana Limited), which produced about 2% of revenue, nosedived; it dropped to NGN13.3 million from NGN346.9 million, losing 96.2% in a year. 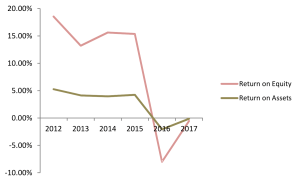 Both Return on Equity (RoE) and Return on Assets (RoA) were negative while shareholders' fund was flat at NGN3.4 billion. Total debts amounted to NGN7.9 billion at the end of the 2017 financial year (2016: NGN6.7 billion) while operating profit has not been able to pay off interest in the past two years.  Besides, most of the loans obtained by VITAFOAM were short-term in nature. Short-term loans accounted for 87% of total loans in the year under review (2016:83.7%) and 59.9% of current liabilities (2016: 70.5%). Current ratio was 1.1 while acid test ratio was 0.5. Total assets have grown by 4% while shareholders' fund has grown by 3.7% on a 3-year CAGR basis. Long-term solvency of VITAFOAM is not in doubt.

Business Risk
VITAFOAM imports some of its raw materials and as such is exposed to volatility of the exchange rate. The company lost NGN232.9 million due to exchange difference in 2017 which was lower than NGN346.6 million lost in 2016. VITAFOAM has weak economic moat and faces competition from both local and foreign firms. 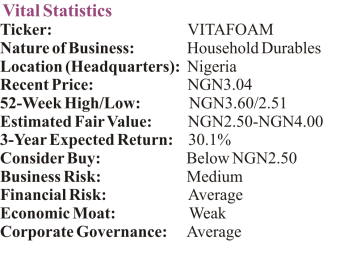