Company Overview
Accelerate Property Fund Limited (APF), a real estate investment trust domiciled in South Africa, did not commence business until December 12, 2013.  Subsequently, it became listed on the Johannesburg Stock Exchange.  APF affords investors the opportunity to profit from the real estate even if they do not have the huge capital to buy properties directly. It invests in a portfolio of properties that produces streams of income that would be distributed to its unitholders.

The company acquires, redevelops and leases retail, commercial and industrial properties with more focus on the retail segment of the market from which it derives roughly 73% of its revenue.

APF decided to sell its properties in four provinces in order to concentrate on two South African provinces (Gauteng and Western Cape) and Europe. The four provinces chosen for divestment together produce about 3% of both revenue and operating profit. The sales proceeds would help reduce indebtedness and provide working capital. The four promising locations where its properties are sited in South Africa are Fourways (Gauteng), Charles Crescent (Gauteng), Foreshore (Western Cape), and George (Western Cape).

Investment Thesis
APF boasts of 42 properties in South Africa, 6 in Austria, and 3 in Slovakia. Its properties are developed in locations with growth potential, good transport system, and adequate demand. South Africa accounts for 89.8% of the gross leasable area and 89.8% of the turnover of APF. APF’s   portfolio of properties in South Africa is valued at R8.9 billion. The refurbished Fourways Mall, which was reopened in August 2019, would improve unitholders' value going forward. The mall accommodates over 450 stores.

In a bid to boost revenue and spread risk, APF embraced property acquisition overseas. The European operation made revenue of R105.6 million at year-end (March 31, 2020) which translates to 10% of total revenue in the year under consideration.

The retail segment is expected to drive the earnings growth of the company. At present, there are 19 retail properties valued at R7.5 billion. The retail market segment has the lowest vacancy rate of 6.5%. However, this segment may experience sluggish growth because of the weak South African economy which accounts for about 90% of the revenue from this segment.

Property acquisition has led to mounting debts. We believe that this would pave way for APF to broaden revenue sources going forward. The company is disposing of non-core assets and retaining quality properties. The vacancy rate is low while most of its tenants are retained. 56.8% of its tenants are large national tenants and listed companies such as Capitec Bank, Shoprite, Jet Stores, Woolworths, Absa Bank, and KPMG. Moreover, the length of the lease period of its portfolio assures that revenue is not truncated.

The sale of non-core assets is expected to improve the quality of its portfolio going forward. Though performance has deteriorated in the year under review, we do not believe that the long-term profitability and solvency of the company are impaired. Over the last five years, APF has grown gross earnings and investment properties by 8.5% and 12.5% respectively.

Valuation
APF trades at 0.1 and 0.7 times book value and sales respectively. Its current market price of R0.75 is below our estimate of a unit of the company.  We advise investors to pay below R2.60 per share. We are of the opinion that investors could earn a 94.2% return on their investment in three years' time.

Financial Overview
Sluggish economic activities impacted the performance of APF in the financial period that ended on 31st March 2020. APF posted a revenue of R1.1 billion at the end of the year  (March 31, 2020). This amounted to an 11.5% decrease, in contrast to the 2.6% increase of the preceding year. The retail segment, which produced 62.3% of total revenue, shed 7.6%. Revenue from the office and industrial lease worsened by 22.2% and 20.4% respectively.  The lowest year-on-year revenue fall came from its European operation (0.7%).

Total debts are rising; though APF can meet its interest obligations, short-term liquidity may be threatened if short-term debts are not contained. But we believe that long-term solvency is not in doubt.

Business Risk
The current economic quagmire could make vacancy rates to escalate and impact revenue adversely. But the relatively long lease period of some of its properties could be a cushion. In addition, the accumulation of more debts, especially short-term debts, may pose liquidity problems and affect profitability negatively. 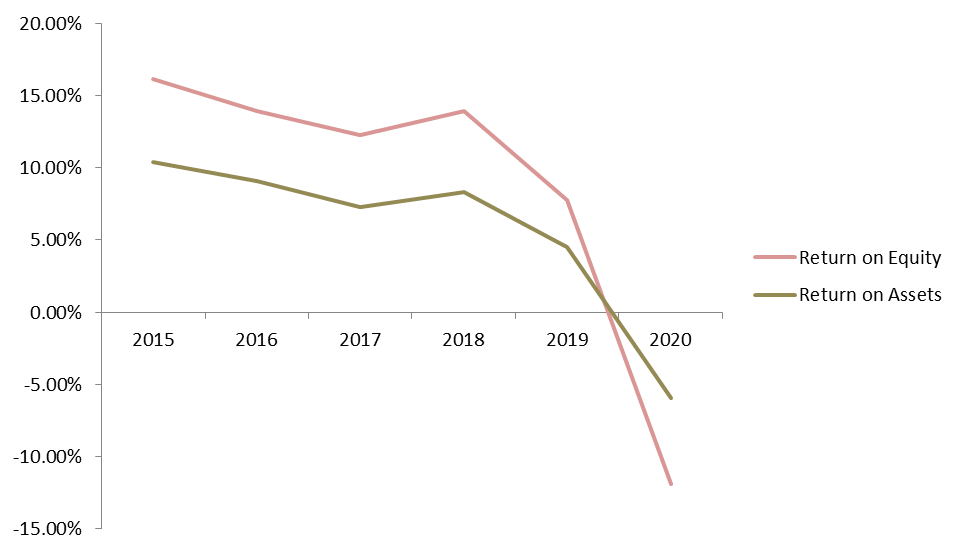