United Bank for Africa Plc merged with Standard Trust Bank Plc in the wake of the recapitalisation exercise in the banking sector in 2005. Thereafter, UBA acquired Continental Trust Bank Limited in December 2005.

It has established its presence in 23 countries including 20 African countries. Technological improvement has resulted in streamlined and efficient operations.

Investment Thesis
It has a large distribution network in Nigeria from where it derives roughly 75% of its revenue and 73% of its Profit After Tax (PAT). Total deposits have grown at a 3-year compound  annual rate of 9% compared to 5% of a year ago. However, loans are expan 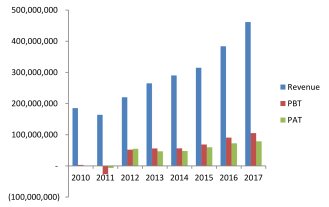 ding faster than deposits which has pushed total debts to over NGN500 billion.

UBA's offshore subsidiaries have shown strong earnings growth in the past three years. Revenue and profit from outside Nigeria are growing fast. Revenue from the rest of Africa was 23.6% higher than what was achieved in the year before; similarly, Europe had 28.6% boost in revenue. In addition, PAT growth has been erratic in Nigeria compared to other parts of the world.

Valuation
UBA trades at 11.9 times earnings and 0.5 times book value. Adjusted EPV is NGN11.6 while forward Earnings Per Share (EPS) is estimated at NGN1.02. We valued UBA using our Discounted Cash Flow and 2-Stage Dividend Discount Models. We have arrived at a fair value estimate between NGN7.1 and NGN9.6 per share of UBA.

Financial Overview
The bank's turnover has increased at an average of 18.9% over the past six years due to a steady rise in interest income. Interest income has been growing at compound rate of 19.2% in the last six years. Net interest income, the bank's core income, gained 25.7% in 2017 compared to a 23.7% boost of the previous year; however, this translates to 20.4% growth on a 6-Year Compound Annual Growth Rate (CAGR) basis.  This is due to the ability of the bank to grant more loans at high rate and attract cheap deposits.

Interest income on loans stood at 19.7% while interest expense on deposits averaged 4.4%. Low interest on deposit is attributable to the relatively strong presence of the bank in the retail segment of the market which enables it to attract cheap deposits.  Despite the competitive pressure, UBA has grown retail deposits at 17.6% over the past three years. 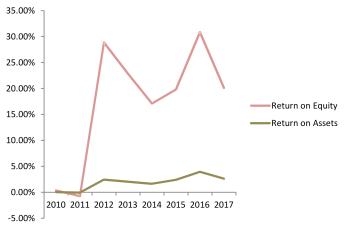 Business Risk
Net interest margin may decline as competition for deposits increases. The bank may find it difficult to successfully increase interest rate as this would reduce loan volume. But we believe that UBA has a fair share of the market and should be able to maintain it in the longer term. It has a widespread branch network but there is no strong economic moat in sight. 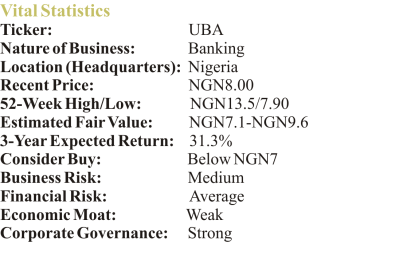