Champion Lager Beer, its flagship product was launched in 1976. The company also produces Champ Malta, a non-alcoholic malt beverage. CHAMPION was shut down in 1990 due to working capital problem. It, however, resumed operation in 2001.

Investment Thesis
After years of losses the company finally turned the corner. Profitability was restored in 2015; operating profit was NGN154.5 million in 2015 compared to operating losses of the earlier years. Profit Before Tax (PBT) and Profit After Tax (PAT) were NGN248.4 million and NGN77.1 million respectively in 2015. In 2018, the company wrote off the accumulated losses which stood at NGN8.6 billion at the end of the 2017 financial year.  CHAMPION has no accumulated losses at the end of the second quarter of 2020. We expect the company to resume payment of dividends soon and attract more investors.

Revenue has increased at a compound annual rate of 21.5% over the past three years (2018: 10.8%). Book Value Per Share (BVPS) has risen by 1.5% over the past three years. Earnings Before Interest, Taxation, Depreciation, and Amortisation (EBITDA) shed 2.6% on a 3-year Compound Annual Growth Rate (CAGR) basis while EBITDA margin of 16.2% ranks among the best in the sector. At present, CHAMPION provides brewing services to Nigerian Breweries Plc, a member of the Heineken group, and the largest brewing company in Nigeria. The company made NGN1.8 billion from contract brewing and packaging in 2019 compared to NGN1.7 billion of the previous period. This was tantamount to 26.3% of total revenue (2018:35.7%).

Although CHAMPION is debt-free, generating a positive working capital has been a difficult task for the company. The company seems to have sustained its improved performance considering its quarter 2 result of the 2020 financial year. An operating profit of NGN144.3 million and a PBT of NGN171.4 million were posted. Total assets increased by 3.9% quarter-on-quarter. Shareholders’ fund was NGN8.2 billion, up from NGN8 billion of the corresponding period of the previous year.

Valuation
CHAMPION  has a forward Price/Earnings (P/E) ratio of 23.7 times; it trades at 0.7 times book value and 1.7 times sales.  It has a projected BVPS of NGN2.1 and an estimated fair value ranging from NGN1.00 to NGN1.41 per share.  A share of the company should produce a return of 44.3%.

Financial Overview
Champion realises revenue from the sale of its own products and contract brewing and packaging. Total Revenue rose by 45.4% from NGN4.8 billion to NGN6.9 billion between 2018 and 2019. This was largely driven by a 66.8% increase in the sale of its products. Revenue from contract brewing and packaging increased by 6.9% year-on-year. Operating profit was NGN212.1 million as against the operating loss of NGN299.8 million of the earlier financial year, 2018. PBT jumped from –NGN209.6 million to NGN241.5 million while PAT leapt to NGN168.5 million from a loss after tax of NGN263.8 million.  The BVPS of NGN1.12 was a 1.8% improvement on the figure for 2018. Earnings Per Share (EPS) of NGN0.01 was better than –NGN0.02 of the previous year.

The cost of raw materials and consumables increased by 46.2%; it accounted for 24.5% of revenue compared to 2018 when it was 24.4%% of revenue. The cost of sales rose from NGN3.6 billion to NGN5 billion. The cost of sales to turnover was 72.1% down from 75% of the previous year. The gross profit margin was better by 2.9 percentage points and operating profit margin of 3.1% represented a 9.4% improvement on the negative figure of a year ago. PBT margin gained 7.9% while the PAT margin added 8%.

Shareholders' fund gained 1.2% while total assets increased by 4.7%. Returns were low; Return on Equity (RoE) and Return on Assets (RoA) were 1.2% and 0.9% respectively. The company generated a free cash flow of NGN515.4 million in 2019 compared to the prior year in which increased capital spending led to negative free cash flow of NGN139.6 million. CHAMPION has no debt at the moment. Both current and acid test ratios were more or less 0.9 and 0.6 respectively.

Business Risk
The market is dominated by a few players. CHAMPION does not have a strong competitive advantage in the industry. In addition, the product portfolio is narrow and the distribution network needs to be strengthened. 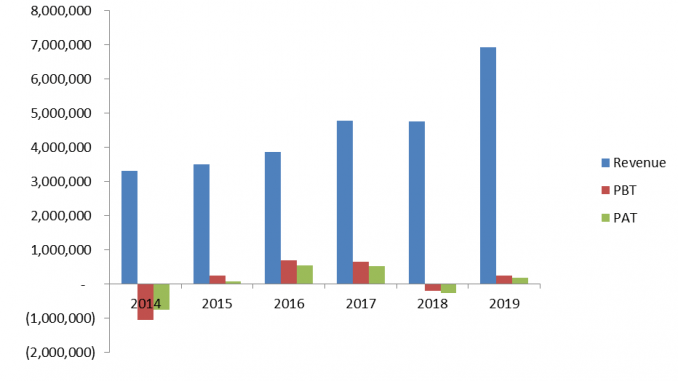